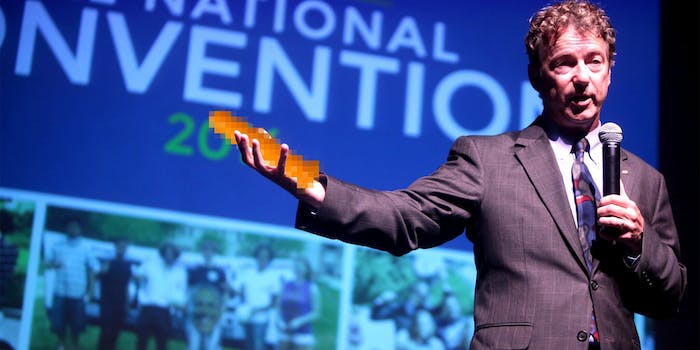 Just whip something up in Photoshop.

It is a universally acknowledged truth that a conservative politician in possession of a good electoral fortune must be in want of a photo-op during which they are holding a gun.

By combining those two axiomatic facts of the universe, Matt Haughey came up with a brilliant idea: #GOPDildo—a social media campaign to take pictures politicians holding guns and replace the firearms with sex toys.

For Haughey, who also created the community blog MetaFilter, the project is largely an act of protest against the Republican Party’s unwillingness to budge on the issue of gun control in the wake of mass shootings like the those at a Planned Parenthood facility in Colorado Springs, Colorado, and a government employee holiday party in San Bernardino, California.

“I saw the right wing not only defending their stupid policies of guns and more guns but doubling down on everything. It’s all just so appalling, especially when real people are saying things so terrible you can’t even parody it,” Haughey told the Daily Dot in an email. “So that’s where I started, by saying ‘This is madness, but what can I do to shine a light on it?’”

Haughey said plans on continuing the project through to Election Day, documenting his progress on Tumblr.

While the idea that guns are a metaphorical extension of one’s manhood has been around for nearly as long as guns themselves, what makes the whole thing work so well, said Haughey, is largely in how politicians make a big show of being reverent towards the weapons themselves.

“I think it’s the inherent hilarious positioning in them, how everyone’s eyes are all lit up in photos where they’re staring at a gun, so when I would swap something else, it’s makes for a good effect,” he said.

While the organizer of U.T.’s “Cocks Not Glocks” protest received death threats for her activism, the only pushback Haughey has received so far came in the form of some conservatives insisting #GOPDildo wasn’t particularly funny.

“It’s ok if you think this is a dumb project,” he shrugged. “I certainly do, too.”