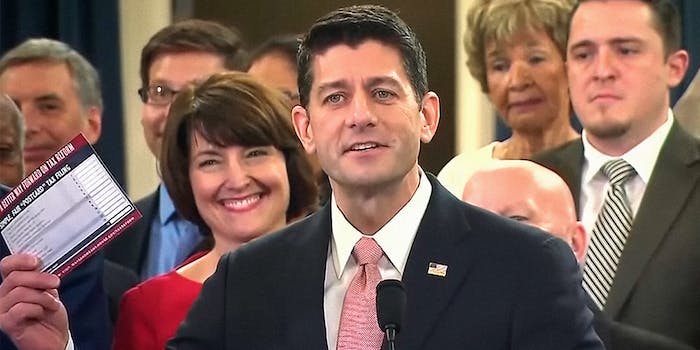 How the GOP’s tax plan will screw you specifically

Don't worry, rich people. You're getting a good deal.

One of the Republicans’ favorite fiscal tricks is masking benefit cuts for average Americans behind tax cuts. The hope is that most voters will see a paltry middle-class tax cut instead of the massive cuts to programs and huge breaks for the rich.

The House GOP’s newest attempt at a massive tax cut for the wealthy was released on Thursday. Called the “Tax Cuts and Jobs Act,” the plan is heavy on cuts and low on jobs. We don’t know the extent of the budget cuts required to pay for these tax breaks yet, but there are already brazen assaults on working people built into the proposal.

Broadly, all Americans will be affected by this plan. In exchange for a modest middle-class tax break, estimated to average about $1,000 per family of four, taxpayers will give corporations a 43 percent tax cut, moving the corporate tax rate from 35 percent down to 20 percent. It is worth mentioning that most corporations pay nothing near a 35 percent rate, but this plan won’t fix that problem either.

So, that’s corporations. Here’s how the plan might affect the rest of us.

Anyone who gets sick or hurt

Let’s get into the more personal ways the Republicans may be trying to screw you. Do you anticipate any medical costs in the future? Medical expense deductions will be removed under this new plan. The lower your income, of course, the more likely your expenses could exceed your tax cut. You will also no longer be able to deduct costs of unexpected property or casualty damage. So, try not to have any tragedies befall you in the near future.

If you, like so many young people, have massive student loan debt, things are going to get even worse. One of the few respites for students suffocating under mountains of debt has been the student loan tax deduction, which gives a paltry break to students who pay interest on their loans. Under the Republican plan, this break will be gone.

Do you live in California, New Jersey, or New York? The US tax code currently has a SALT (State and Local Tax) deduction that allows you to deduct local taxes from your federal bill. Those who live in high tax states with robust infrastructure and social programs depend on this deduction. This provision rewards states like Kansas and Alabama that have decimated their local government programs in recent years. The more dystopian your state, the better off you’ll be under this plan.

The Republican plan also places the dream of homeownership further away from young generations while offering advantages to those who already own large estates. Currently, homeowners can deduct interest payments made on the first $1 million in home loans. The new plan will only allow deductions on the first $500,000. This proposal comes as the costs of homes continue to rise. For reference, the median cost of a home in Los Angeles County is $569,000. Adding insult to injury, and adding to the tyranny of the Baby Boomer generation, homeowners will now be able to only deduct up to $10,000 in local property tax from their taxable income. To all of you millennials still renting, well, you should have been born thirty years ago.

The tax plan is not, however, negative for every American—in fact, it may be a great deal, as long as you are rolling in cash.

There are people the plan will help. For example, if you are a wealthy heir or heiress, you’ll receive a much-needed boost. The House plan also calls for a repeal of the estate tax. The estate tax is currently set at 40 percent, but it only affects those who leave more than $5.5 million to their heirs. In the short terms, that limit would rise to nearly $11 million, eventually ramping up to the elimination of the estate tax. The estate tax may seem like a non-issue, but there is danger to all Americans in the creation of an aristocratic class that can hoard wealth over decades and even centuries.

If you’re wealthy but don’t plan on dying anytime soon, there is help for you as well. The bill repeals the Alternative Minimum Tax (AMT), which currently prevents rich people from claiming so many deductions that they pay practically zero taxes. President Donald Trump would have successfully reduced his effective tax rate to 4 percent if not for the AMT in 2005.

If you can’t find spots in this plan—from student loan interest rates to medical expenses—where you’ll likely end up paying back more than the cost of your tax break, just wait until the government attempts figure out how to cover the massive cuts.

As it stands, this cut will create $1.5 trillion in additional debt as they attempt to pay for these massive breaks for corporations and the wealthy. While the Republicans are quick to insist that trickle-down economics will stimulate the economy, history proves otherwise. It’s more likely this tax cut will be paid for with further cuts to parks, the arts, environmental protections, healthcare, infrastructure, and social programs.

The tax plan, as with all Republican policy, will likely hurt the vast majority of Americans with a battery of cuts, while funneling more money to the top 1 percent. Chances are, it is going to hurt you.