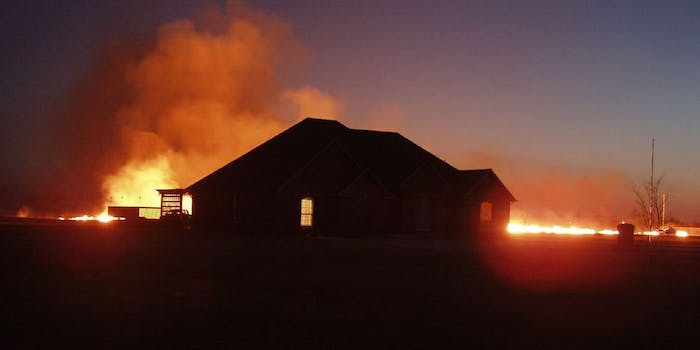 This is basically just a 'Veep' episode at this point.

The Republican party reportedly suffered an “implosion” while in “free-fall” before finally residing in a state of “total chaos” and “disarray” on Thursday.

The political upheaval came as a result of Rep. Kevin McCarthy (R-Calif.), the leading candidate to replace outgoing Speaker John Boehner (R-Ohio), unexpectedly ducking out of the race. Some GOP members were “audibly crying” in the moments after McCarthy announced his exit.

Rep. Peter King tells me that members are crying in cloakroom, unable to handle the unrest and confusion. "A banana republic," he says.

In response to a question Quora about why he dropped out of the race, McCarthy explained that he believes the Republican leadership needs a “fresh face who can bring Congress together,” implying that he is not that person. He wrote:

House Republicans need a new leader that can unite them, and after many days of talking with my colleagues, it became clear that I would not be that person. The selection of a new Speaker can never be about a single person, it must be about doing what’s right for the country.

We need a new start—a fresh face who can bring Congress together. I hope that my choice will help heal the wounds that are keeping well-meaning people from finding common cause for our country.

So who will be the new House speaker? Nobody knows. In fact, a handful of Republicans have even floated the idea of electing a “caretaker” to the position—a temp, so to speak, who would be second in the presidential line of succession.

“The best course would be for us to select a candidate for speaker who will serve in that capacity for the next 15 months,” Rep. Tom Price (R-Ga.) said in a prepared statement.

“This would allow the House to complete the business in a responsible manner, providing ample time for everyone’s voices to be heard,” Price added, “leading into full leadership elections in November of 2016.”

Boehner, who announced late last month that he was retiring at the end of October, said he would remain in the House until a suitable replacement can be found. The vote to replace him has been postponed indefinitely.

Today's leadership election has been postponed until a later date.

Boehner is now rumored to be courting Rep. Paul Ryan (R-Wis.) for the position, but it’s not working out too well.

“I will not be a candidate,” Ryan responded when asked about his plans. Twitter, of course, flooded with jokes.

*paul ryan's answering machine, message 1*
"hey paul john here could you give me a call not urgent"

*paul ryan's answering machine, message 26*
paul i'm serious
i know you're there
i have a staffer outside your window
he says you're crying

There are other signs that things are getting desperate. Newt Gingrich, who vacated the speaker’s chair over 15 years ago, has volunteered to be interim House speaker. “This is why George Washington came out of retirement—because there are moments you can’t avoid,” he said.

Of course, thanks to House rules that allow anyone with the votes to become speaker, they could always bring in someone totally out of left field.

Update 9:55am CT, Oct. 9: Added McCarthy’s comments on his decision to exit the race.