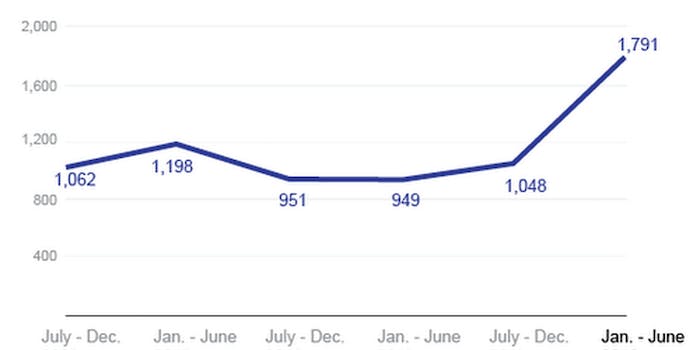 In its latest Transparency Report, Google claims the U.S. made almost 8,000 user data inquiries on just over 16,000 accounts.

On Tuesday, Google reported a substantial increase in requests by governments for user information and for content removal.

“The number of government requests to remove content from our services was largely flat from 2009 to 2011,” the report states. “But it’s spiked in this reporting period.”

In its sixth and latest Transparency Report, Google reports that government agents have registered 20,938 inquiries about 34,614 accounts in the first six months of 2012. In the same period, the company has received 1,791 requests asking it to remove 17,746 pieces of content.

“One trend has become clear,” wrote Dorothy Chu, senior policy analyst for Google. “Government surveillance is on the rise.”

The immediate implication is that governments have become more nosy and more brazen. That may be true, but since the Web became an avenue for everything from criticizing governments to committing crimes, governments have also been fighting a ponderous campaign of catch-up.

That said, the country that made the most requests for removal is the United States, which has held that distinction from the advent of the report. Requests increased by 46 percent since the last reporting period, from about 2,200 to 3,200. This period also saw the U.S. making almost 8,000 user data inquiries on just over 16,000 accounts, up from about 6,300 requests last period.

Google saw a 1,013 percent rise in requests from Turkey, which held an election in June. As Google indicated in its annotation section, it received 148 requests to remove, among other content, 426 YouTube videos, “all due to alleged criticism of Atatürk, the government or national identity and values.” Google blocked 63 percent of those videos for Turkish viewers.

As much as pornography is touted as an overriding reason for online control, only 3 percent of the content removal requests were for pornongraphy. Defamation was the number one reason, with 39 percent of requests.

Google has adjusted the presentation of its data with this report. In addition to tables of user data and annotations of certain requests, they are showing removal requests in bar graph form “to better display content removal trends over time.”

Reports can be filtered by country and have been translated into 40 languages, including Hungarian, Thai, two dialects of Chinese and Latvian.