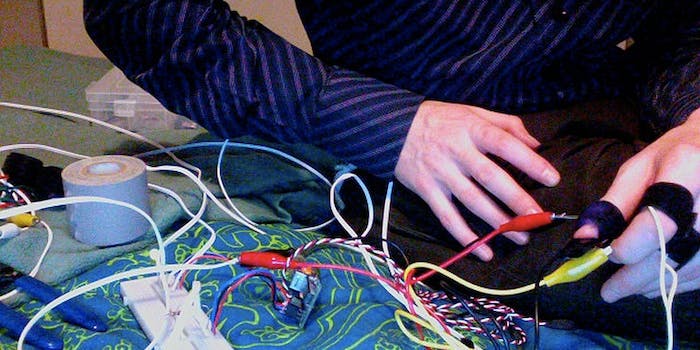 Google goes for the throat with lie-detecting ‘tattoo’ patent

The phrase "sick tat" might have a whole new meaning soon.

If you were on the fence about the practical applications of Google Glass, would you wear a Google throat tattoo with a built-in microphone and lie detector?

A patent for the device was filed in May 2012 by the Motorola Mobility Inc., and published on the United States Patent and Trademark Office’s website on Nov. 7, 2013. Titled “Coupling an Electronic Skin Tattoo to a Mobile Communication Device,” the abstract explains its surface function:

“The system comprises an electronic skin tattoo capable of being applied to a throat region of a body. The electronic skin tattoo can include an embedded microphone; a transceiver for enabling wireless communication with the MCD; and a power supply configured to receive energizing signals from a personal area network associated with the MCD. A controller is communicatively coupled to the power supply. The controller can be configured to receive a signal from the MCD to initiate reception of an audio stream picked up from the throat region of the body for subsequent audio detection by the MCD under an improved signal-to-noise ratio than without the employment of the electronic skin tattoo.”

The practical application here: This microphone could be applied directly to the user’s throat, so as to cut down on the background static we often face when talking on our phones in a noisy environment. By extension, this microphone could also be used to send voice commands to our mobile devices, which could cut out the hands-on applications, and make things like texting easier.

It could also potentially “enable communicative coupling of the electronic tattoo to external electronic devices such as a smartphone, a gaming device, a tablet computer, a wearable computer.”

In this brave new world of digital neck tats, does this mean our bodies will provide the battery supply, possibly via kinetic energy? Not quite. The patent says the device “may employ solar panel technology, capacitive technology, nanotechnology, or electro-mechanical technology, for example, as a means to generate and distribute electrical current.” Well, the user in their blueprint certainly looks comfortable, right? 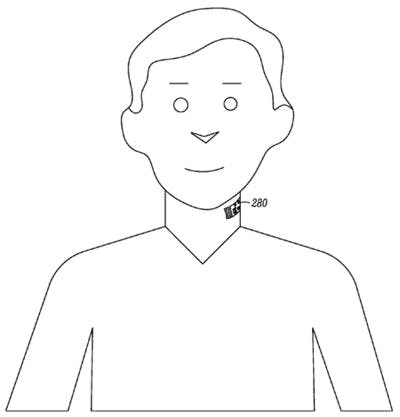 Towards the end of the description section, another application emerges:

“Optionally, the electronic skin tattoo 200 can further include a galvanic skin response detector to detect skin resistance of a user. It is contemplated that a user that may be nervous or engaging in speaking falsehoods may exhibit different galvanic skin response than a more confident, truth telling individual.”

No further details are offered as to why someone would need this feature, unless you were attempting to covertly catch someone in a lie. This opens up a whole new can of ethical worms, as does its potential applications for eavesdropping.

There are also more practical ways to wear the device besides just a tattoo: It could be “embedded in a collar or band that would be worn around the throat a user.” As has been pointed out, any instructions for potentially removing the device were left out of the patent description. Feeling claustrophobic yet?

Now that those mysterious Google barges have been outed as “interactive” spaces for learning new Google products, it might only be a matter of time before you too can experience the future via their digital lie-detecting collar.