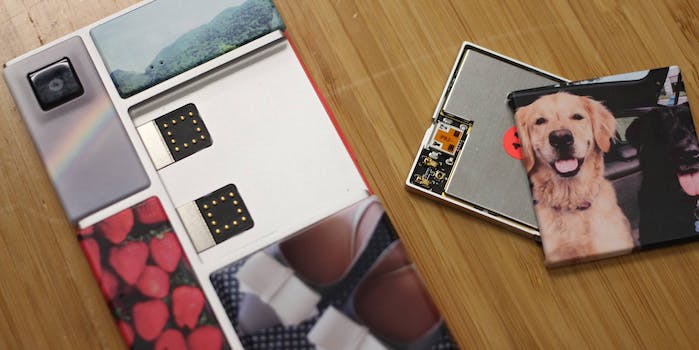 The pieces just haven't fit together.

Sometimes things just don’t come together. That appears to be the case for Project Ara, Google’s modular phone initiative, which has been suspended according to a report from Reuters.

A spokesperson for Google confirmed to the Daily Dot that the Reuters report is true and accurate.

First revealed in 2013, Project Ara was Google’s attempt to create an affordable smartphone that could easily be customized and upgraded by simply swapping out specific parts housed in replaceable, interchangable modules.

Modular phones offered the promise of a more affordable device that wouldn’t be subject to the standard life cycle of smartphones. Users would buy parts made by many developers rather than devices made by just a handful of major companies.

The decision to shutter the project comes as a bit of a surprise, as Google was still speaking publicly about Project Ara at its Google I/O developer conference in May. At the time, Google announced a developer edition of the device would be available in the fall.

According to Reuters, the search giant may still attempt to bring the Project Ara concept to market through licensing agreements and partnerships with other companies. The concept of the modular phone will also continue to live on without Project Ara through other initiatives like Phonebloks.

Project Ara’s suspension appears to be a part of an ongoing push to tie up loose ends within Google. The company has also reportedly made efforts to cut in half the staff of its gigabit internet project Google Fiber. Google has also reportedly decided to restructure its connected devices manufacturer Nest Labs.