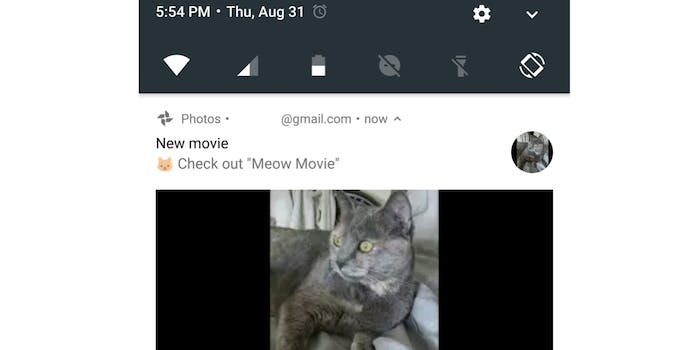 A silly cat slideshow popped up at just the right time.

Yesterday, I unlocked my phone after hearing the ping of a new notification. From the top of my Nexus 6P’s screen, I swiped downward. Two new messages on Facebook Messenger, an alert from Yelp about a new sushi place in my neighborhood, and at the top, something curious—”New movie: Check out Meow Movie,” above a photo of my cat.

I was en route to the bathroom, or the kitchen, I can’t remember. I stopped in my tracks, tilting my head as I pondered the unusual notification.

I knew that, among its many useful features, Google Photos could automatically create themed albums using its various machine-learning algorithms. The app can create an album around a place, useful for organizing photos from a recent vacation with zero work on your end. It can also make albums using image recognition. It can identify certain recurring people in your photos—perhaps you and your partner—and collect all those images in one place. These automatically generated albums are noticeably devoid of duplicates and crappy shots. (“We use a lot of machine learning to detect the elements in a photo that make it of better quality than another,” Google Photos Product Manager Francois de Halleux told Wired in 2016 after this ability debuted.)

Google Photos’ Assistant, the brains behind this feature, can do more than just create albums, however. It can also automatically create collages, animations, and as I experienced, slideshow-style movies. The feature isn’t new—it came out in late 2016—and I knew Google Photos was capable of auto-generating slideshows based on my photos. Somehow, though, I’d never fully experienced the magic of a Google Photos slideshow myself. And indeed, the experience was magical (you can watch my video below to see for yourself).

When I tapped the notification on my phone, I didn’t quite know what to expect. I was greeted with a slideshow of photos of my cat, set to a meow-filled version of “Blue Danube.” I burst out laughing. Where did Google get this song? I couldn’t peel my eyes away. Some of the photos were recent, while others dated back years—I’d forgotten I’d taken them. Almost none of the photos were ones I’d shared to social media. The juxtaposition and order of the photos seemed mostly random, but at times, flowed with some sort of hilarious logic.

Google did not comment on the methods to the madness of this feature when asked by the Daily Dot.

My so-called “Meow Movie” arrived at an uncanny time. I’ve been worried about my family and friends in the Houston area. I feel anxiety and frustration at the state of our country’s leadership. And, being so absorbed in the world of technology, I sometimes have misgivings about promoting something that seems to be having an increasingly deleterious effect on modern society.

My Meow Movie, though. It reminded me that it’s OK to laugh. That life is filled with wonderful, happy, and silly moments—that’s why we trudge through the not-so-pleasant ones. And that technology is capable of bringing joy, delight, and magic into our lives.

A silly photo slideshow isn’t going to change the world, but it can change a mood. It can brighten a day. And as long as they crop up at just the right intervals to be surprising and appreciated, Google Photos’ automatically generated slideshows and animations are a welcome addition to the usual old smartphone notifications. I can’t wait for the next one.