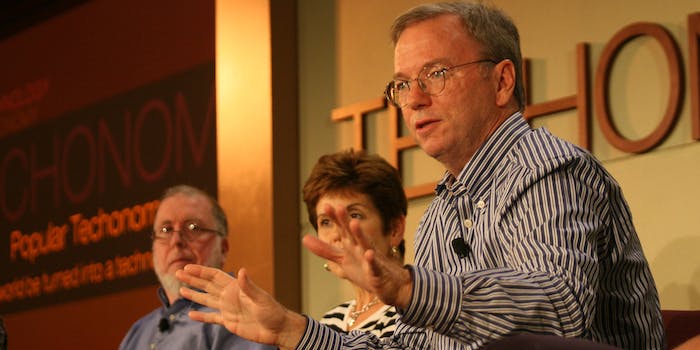 Google‘s association with a notorious conservative group will soon come to an end, according to the company’s chairman.

In an interview on The Diane Rehm Show on Monday, Google Chairman Eric Schmidt responded to a caller’s question about Google’s support for the American Legislative Exchange Council (ALEC), saying that the company viewed it as a “mistake” after recognizing that ALEC endorsed climate-change denialism.

“We funded them as part of a political campaign of something unrelated,” Schmidt said. “I think the consensus within the company was that that was some sort of mistake, and so we’re trying to not do that in the future.”

The Daily Dot reached out to Google to ask when the company planned to withdraw from the group. We will update if we hear back.

Despite its attempts to appear non-partisan, ALEC is funded largely by conservative interests. For example, the Center for Public Integrity reported in early 2013 that the billionaire brothers Charles and David Koch “have decades-long connections with ALEC, which gave the brothers the Adam Smith Free Enterprise Award in 1994.” The Koch Brothers gave ALEC $150,000 in 2011.

Making matters worse is the fact that, instead of recommending policy measures to legislators, ALEC employs lobbyists to write the legislation for them.

Given the group’s leanings, it’s not surprising that ALEC-written legislation has often targeted climate science. One of its highest-profile adventures in climate denialism is the disarmingly titled Environmental Literacy Improvement Act, which promotes climate-science denialism by requiring that schools “provide a range of perspectives presented in a balanced manner.” Proponents of climate-change denialism often use the word “balance” to suggest that schools should teach “both sides” of the climate change debate, even though scientists agree that the debate is settled.

Another one of ALEC’s so-called “model bills” opposing climate regulation found fertile ground in Kentucky, where the state legislature passed a law to undermine the federal Environmental Protection Agency’s national pollution standards. The Kentucky law, which the National Resource Defense Council notes was “based on ALEC language that has been introduced in seven states,” would make it more difficult for the Bluegrass State to meet EPA pollution limits by “by preventing the state from using the least expensive methods to reduce carbon pollution.”

Google has been part of ALEC’s Communications and Technology Task Force since at least August 2013, when a Daily Beast report named it among other companies working with the conservative group.

In response to a follow-up question from Rehm during the interview, Schmidt said that ALEC’s support for climate-change denialism did not square with Google’s view “that we should make decisions in politics based on facts.”

“The facts of climate change are not in question anymore,” Schmidt said. “Everyone understands climate change is occurring, and the people who oppose it are really hurting our children and our grandchildren and making the world a much worse place.”

As the interview ended, Schmidt went even further, saying that Google “should not be aligned with such people” because they were “just literally lying.”