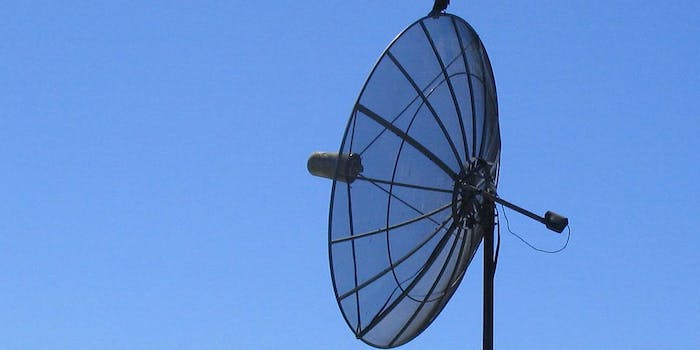 The Internet arms race is heating up.

Google is planning to put 180 satellites in orbit at a cost of more than $1 billion in order to build out a global Internet service, according to the Wall Street Journal. As the Daily Dot reported back in April, Google has entered into an arms race with Facebook to create a worldwide Internet service, and this move is the latest in the effort to get people in underserved areas online.

While the Wall Street Journal reports that details of the project remain uncertain, Google is looking to utilize smaller than usual satellites that weigh 250 pounds and will orbit at lower altitudes than conventional satellites.”Internet connectivity significantly improves people’s lives. Yet two thirds of the world have no access at all,” a Google spokeswoman told the Wall Street Journal.

Greg Wyler is leading the effort, according to report. Wyler, the founder of O3b Networks Ltd., a satellite communications company, recently joined Google and has begun putting together a team of experts to run the satellite program, which will report directly to Google CEO Larry Page.

In what may be the most beneficial corporate race in history, Google and Facebook may end up being the world’s best Internet providers. Of course that’s a low bar to surpass, given the options we’re currently stuck with.