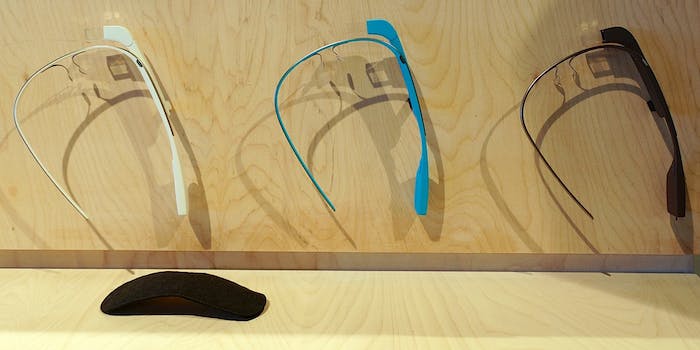 The one-day sale might help break down the stigma, but Google has a long way to go.

Yesterday, Google held a a one-day-only sale for its high-tech headgear Glass. Glass still costs $1,500 plus taxes, so there was no discount; the sale just made them more accessible. Would-be Glass wearers ordinarily have to apply and wait weeks or months to be accepted to the company’s Glass Explorer program before Google allows users to make a purchase, so the sale made the controversial headwear available to U.S. residents over 18 on a first-come, first-serve basis.

Today, Glass goes back to its limited availability, but Google is preparing for a wide release. Luxottica, the eyewear company Google is partnering with to make Ray-Ban and Oakley-framed Glass, said its versions of Glass would be on the market around 2015, so it won’t be too long until it gets easier to the device.

But will wider availability lessen the growing stigma attached to Glass ownership?

Glass is the most divisive gadget on the market. In San Francisco, where class tension percolates as tech-sector salaries rise and longtime residents who aren’t employed by Twitter, Facebook, Google, or any of the area’s preponderance of start-ups chafe under spiking living costs, Glass has become much more than a pricey new toy: It’s often seen as a symbol of elitism and privilege.

In two separate incidents, tech industry Glass wearers were assaulted wearing Glass in San Francisco, and linked their assaults to the local animosity, and the type of person who wears the technology. Elsewhere in the U.S., privacy concerns about Glass have prompted business owners to ban them from restaurants. State legislators worried that Glass isn’t safe behind the wheel have introduced bills to bar people from wearing it while driving. There’s a service called Anti-Glass to protect people from being recorded by the headwear. The MPAA thinks Glass could be a piracy tool.

It’s easy to find people perturbed by what Glass represents: Glass is a signifier of unexamined, blithe affluence for the anti-tech crowd. It is a signifier of privacy erosion for groups concerned with how they can be used to record and catalog.

At $1,500, Glass is expensive hardware. Even for people with the economic status to afford Glass, the nascent technology can seem like a bad investment. If you’re not into early adopton for its own sake, it seems prudent to wait until the price drops and more software and apps become available. So even for people who have the money, that alone might not be enough motivation to invest in what is being interpreted as a certain type of unchecked hubris.

But Glass defenders say the headwear and its wearers are being unfairly maligned simply for being a new technology. To defend its product, Google compares the public response to Glass to the public response to cameras in the 19th century. But it’s more apt to compare Glass to the mobile phone, and defenders do. In the 1980s, mobile phone users were often shorthand in popular culture for selfish yuppies. Movies used a fat mobile phone to show viewers if a character was a gauche, consumerist douche.

Obviously as more of us had cell phones in our pockets, using them to indicate Wall Street assholes and clueless doofuses wasn’t going to work. They lost their power as a symbol of unfettered dickheadedness and became a tool of modern life; in fact, nowadays, if you live in the U.S. and choose not to have a mobile phone, you’re considered obnoxious/pretentious (or a clueless Luddite).

It’s not completely impossible that the same thing could happen with Glass in 10 years (given that Glass comes up with a compelling function that makes it as essential to modern society as mobile phones… which hasn’t happened yet.) And yes, Glass raises legitimate concerns about privacy and piracy. But that also has precedence with phones: As camera-equipped smartphones became more popular, privacy advocates and the MPAA were concerned about their ability to record and act as surveillance tools, and smartphones continue to act as a flashpoint for anti-tech types—but Glass is rarer, more exclusive, more expensive, and far more flagrant in its conspicuity. It’s a sexier replacement symbol of Vile Tech Decadence, and so it faces more challenges in being accepted.

If Glass never surmounts its controversies—if it fails to gain mainstream use and fades into the hall of misfit tech fads—Glass won’t be the iPhone. It won’t even be the Kyocera Rise. It will be the Segway, as skeptics have argued.

Google glass has the same problem as the Segway: you look like a dork.

Calling it now: Google Glass is the next Segway. No amount of hype can make either device cool.

Glass could very easily become the equivalent of a thing most commonly used by tourists paying stupid amounts of money to use during a two-hour tour led by a relentlessly chirpy guide.

And Glass isn’t like the smartphone, or the Segway, or like any product that has come before it in regards to how invasive it is. Right now Google doesn’t allow facial recognition software for Glass, but that hasn’t stopped developers from making such services. Smartphones are powerful surveillance tools, but when someone is taking a video of you with their phone, it’s usually fairly obvious. On Glass, there’s no external diode that shows recording taking place. If it becomes socially acceptable to walk around with Glass on our faces, people may have to start leaving their houses under the assumption that their peers are recording them. Privacy concerns for Glass have reached a pitch that exceeds any other emerging technology, and they’re going to be a major obstacle to overcome as Google tries to bring it into the mainstream.

So right now, although there’s a chance Glass could become the next iPhone and we’ll all be Glassholes in a few years, the privacy concerns and the social stigma surrounding its ownership outweigh the cool factor. And, other than sitting on your face instead of in your pocket, there’s not enough unique functionalities for Glass that justify spending $1,500 to replace or complement smartphones. Even if Google keeps this sale going (and it could hold another, because it sold out of one of its models yesterday), I suspect it would deplete its Explorer waiting list rather than make it a breakthrough product at this point.

But that may change. Doctors, firefighters, and police officers are testing Glass and finding uses. More will follow. The upcoming round of frames might end up looking much more palatable than the current crop. If Google can prove that Glass is a tool, not a toy, and an attractive one to boot, the social stigma may lessen, although privacy concerns will persist.

Although the Glasshole stereotype has gained traction, it can still be eradicated. Making the device more available for a day is a small step towards mainstream adoption, but Google has a lot of work to do to make Glass happen.