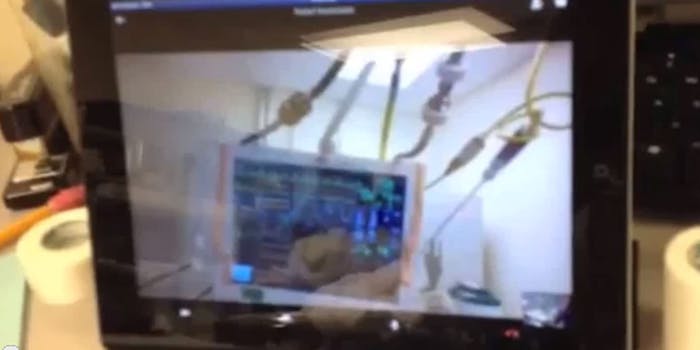 Google Glass is already being used in the operating room

The future of healthcare industry may be livestreamed in a private Google Hangout.

Google Glass has gotten grief for being goofy-looking, expensive, and intrusive—oh, and then there was that Roger Scoble shower (shudder)—but as the wearable computers begin to get into the hands of real people, we’re finding out just how useful they are. Case in point: A pair of Google’s glasses have now officially been used in the operating room, and the surgeon who used them says they offer huge potential for the healthcare industry.

During a recent abdominal surgery, general and trauma surgeon Dr. Rafael Grossmann put his Google Glass to the test, beaming a livestream of his point of view to a private Google Hangout and onto an iPad. (The video above appears to bounce back and forth between footage from a cell phone and that of Grossmann’s Glass.) Aside from the Glass, all he required was a Google account to transmit real-time footage to colleagues, which could be a huge leap forward for a cheap telemedicine setup.

Obviously, the one of the MAIN concerns regarding the use of Google Glass during surgery, with live streaming of data, would be to take every measure and to ensure the privacy of the patient’s health information (PHI).

That’s exactly what I did. Not only I obtained informed consent about what we were going to attempt (and documented it), but most importantly, made sure that no recording or transmission of any identifying information was done. The streaming of video and photos, to “myself” thru Google Glass, did not reveal any PHI, or even show the patient’s face.

Grossmann writes that the patient required a feeding tube to be inserted his or her abdomen, which Grossmann says is simple enough for him to test out the Glass without worry. Aside from his own POV shot, he was also able to show the feed from the surgery team’s endoscope (the little camera that goes inside patients) every time he looked at the large endoscope display.