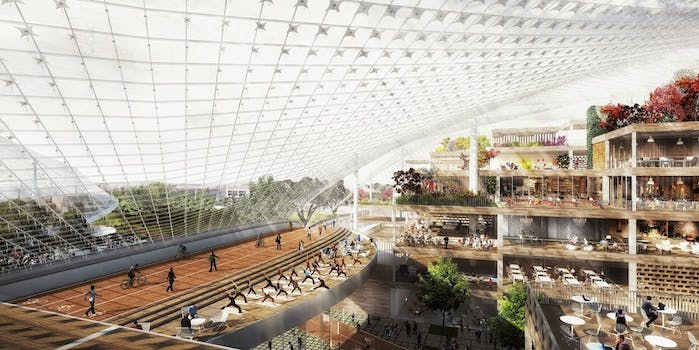 The company won't begin construction for at least five years.

Apple isn’t the only one planning a new futuristic campus. Google debuted plans for its own structure in Mountain View, Calif., which includes domed canopies made of flexible glass and open areas for both the public and Googlers to wander around in.

The company partnered with architects and designers Bjarke Ingels and Thomas Heatherwick to create plans for a campus that’s large, environmentally friendly, and contains things like restaurants and shops. This effectively turns Google’s growing presence in Silicon Valley into its own tiny town.

Google’s concept ditches concrete, and instead features “lightweight block-like structures” that can be moved around when the buildings need to be reconfigured to fit different Google teams. The company is also putting an emphasis on growing and maintaining the greenery native to the area, and plants will be placed both inside and outside the glass buildings. Ingels describes the plans for the glass canopies as “a super-transparent, ultra-light membrane.”

“Everything has turned into parking lots,” Ingels said in a video. “We’re trying to reverse this process and recreate the natural qualities that have been there in the first place.”

The company submitted its proposed campus to Mountain View city officials this week for review. The designs are still in the concept phase, and Google won’t begin construction for at least five years.

This video describes Google’s plans in more detail, and shows off the renderings of what the domed campus is going to look like. And, if all goes as planned, Google will become one with nature and build domes in Mountain View that both workers and neighbors can enjoy.