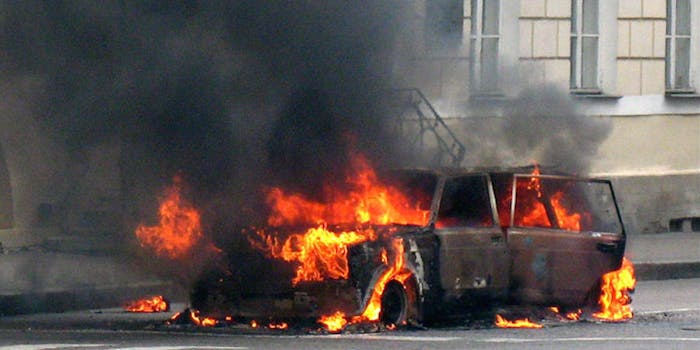 'Enforced silence is not the answer.'

“ISIS is having a viral moment on social media, and the countervailing viewpoints are nowhere near strong enough to oppose them,” said Google policy director Victoria Grand.

“We are still seeing about two or three of these beheadings each week,” she added. “They are heeding advice from a decade before from Osama bin Laden, and they are taking it to another level using social media.”

Despite the Islamic State’s reach online, Grand and her colleague said, censorship is not the answer.

“ISIS is having a viral moment on social media, and the countervailing viewpoints are nowhere near strong enough to oppose them.”

ISIS has launched a considerable social media campaign since declaring itself a “worldwide caliphate” almost one year ago, and it has even used video games in an effort to attract new recruits. Google has vowed to prevent itself from becoming a platform for violent terrorist propaganda videos, though many online news sites continue to share the images.

Grand emphasized the educational role of the Internet, informing users about the dangers and “inhuman” violence associated with ISIS. But Google shouldn’t allow itself to “become a distribution channel for this horrible, but very newsworthy, terrorist propaganda.”

“The power of community is not lost on ISIS, and they are using it to great effect,” said chief legal officer David Drummond, who joined Grand at the Cannes festival.

“Right now, the voice of that community is a lot larger than ours, a lot louder, there’s more out there on the Web,” said Drummond. “When I say ours, I mean all of us, all of us in the room today.”

In the aftermath of the Charlie Hebdo attack, Google had to quickly decide how to handle footage of the attack being propagated by its search engine, Drummond said. Ultimately, they decided to leave the video up globally, except in France, where it was banned.

“It’s important to recognize here that the filming was done by a bystander who recorded the event,” said Drummond. “It wasn’t filmed by the perpetrators, wasn’t intended to terrorize anyone. Even though it is shaky footage, it became a critical part of piecing this event together, helping us to understand an event that happened far out of the media spotlight.”

Drummond further argued that, despite the desire to “see less violence in the world,” censorship was not the answer. “We want alternatives,” he said.

“Although we take down the worst content from our sites, at Google, given the proliferation of content online, we don’t believe that censoring the existence of ISIS on Google, YouTube, or social media will dampen their impact really,” Drummond continued.

“We think there is a better way to combat the hateful rhetoric of ISIS, by countering it with reason. Understand it. Standing up to it. Enforced silence is not the answer. Drowning out the harmful ideology with better messages, with reasonable messages, is the better way.”