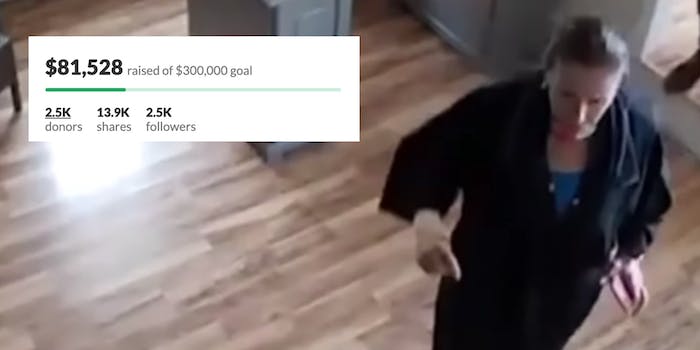 A GoFundMe for the salon Nancy Pelosi threw under the bus raises nearly $100,000

The owner of a San Francisco hair salon at the center of a political controversy involving House Speaker Rep. Nancy Pelosi (D-Calif.) has managed to raise more than $80,000.

Erica Kious, the owner of eSalon SF, says she has no choice but to relocate her business after video from her salon showing Pelosi ignoring the city’s coronavirus rules led to death threats.

The footage, which was provided to Fox News, shows a maskless Pelosi getting a wash and blow-out on Monday despite salons being barred from operating due to the coronavirus pandemic.

The GoFundMe account, set up by a friend of the salon owner named Amy Tarkanian, is seeking to raise $300,000.

“I have been friends with Erica and her family for roughly 20 years and wanted to help. Thank you for taking the time to do the same,” Tarkanian writes. “She is overwhelmed by the flood of support and is grateful for those who are willing to speak out and stand up along her side.”

Nearly 2,500 people have donated thus far, accruing more than $80,000 at the time of publication.

“At the conclusion of this fundraiser, ALL donations will go directly to Erica to pay off any debts from the business that she is forced to shut down, expenses to relocate and reopen in a new location,” Tarkanian adds.

Critics argue that Pelosi’s actions showed an out-of-touch politician flouting the very rules that citizens are expected to follow.

But Pelosi has called the incident a “set up,” suggesting that she was purposely given false information in an effort to frame her.

“I take responsibility for trusting the word of a neighborhood salon that I’ve been to over the years many times,” Pelosi told reporters Wednesday. “It turns out it was a setup.”

Given the momentum, it’s likely the fundraiser will surpass its goal in the coming days.