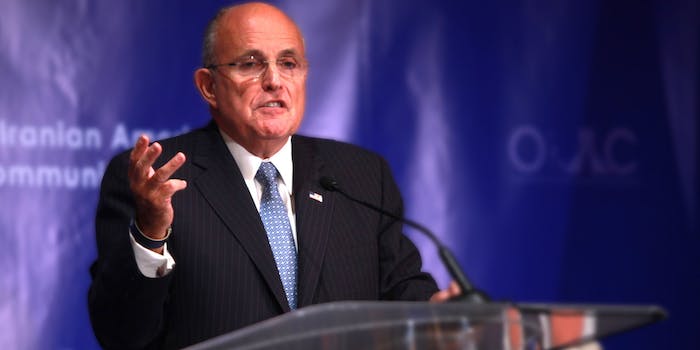 This isn't going over well.

Former New York City Mayor Rudy Giuliani has raised eyebrows after making remarks on so-called “black-on-black” violence in a televised discussion over the civil unrest in Ferguson, Mo., and telling African-American professor Michael Dyson that “white police officers wouldn’t be there if you weren’t killing each other.”

Speaking on NBC’s Meet the Press on Sunday morning, Giuliani sought to question why incidents like the fatal shooting of unarmed black teen Michael Brown by white police officer Darren Wilson in Ferguson were hotly debated—but “black-on-black” crime s not.

“93 percent of blacks are killed by other blacks,” Giuliani claimed, asserting that the events of Ferguson are an “exception” rather than the rule.

To this, Dyson responded that Giuliani’s claim was a “false equivalency,” failing to take into account numerous police forces across the country whose ethnic diversity does not reflect that of their constituents, and that “white people who are policemen who kill black people do not go to jail.”

As the debate grows more heated, Giuliani eventually tells Tyson that “white police officers wouldn’t be there if you weren’t killing each other.”