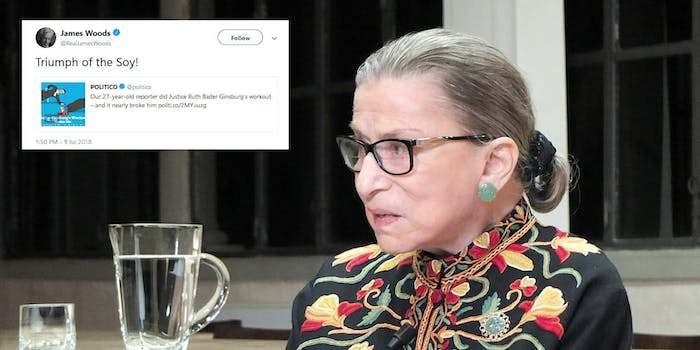 There is a lot involved in the workout routine.

Last year, a Politico reporter tried to do Supreme Court Justice Ruth Bader Ginsburg‘s workout routine and determined it to be pretty intense.

But after the news outlet reposted the story on Twitter—just hours before President Donald Trump is expected to announce his choice to replace Justice Anthony Kennedy—right-wing Twitter exploded, and was convinced the workout was easy.

Because—conservatives and Trump supporters,who love old gender stereotypes and pride themselves on being “alphas”—couldn’t stop laughing at a man supposedly struggling with a workout designed for a woman.

The workout includes a number of different exercises, like:

In the video, the Politico reporter says “this is murder” in the middle of the workout, which is probably understandable considering the scope of the routine.

To a lot of men on the right, he needed to be called out on his supposed failings.

But… fun fact: They did this whole song and dance when it first came out in 2017.

so @SchreckReports has the virility of a little old lady? Not surprised.

He's either lying outright, or is a pathetic excuse of a …. well, anything short of an 83-yr old jewish woman.

And what about in March when Stephen Colbert tried it and the video went viral?

Basically, any time it is in the news, conservatives on Twitter seem to lose it.

If they think it is a breeze, they should try it themselves, instead of just calling a media members cucks.