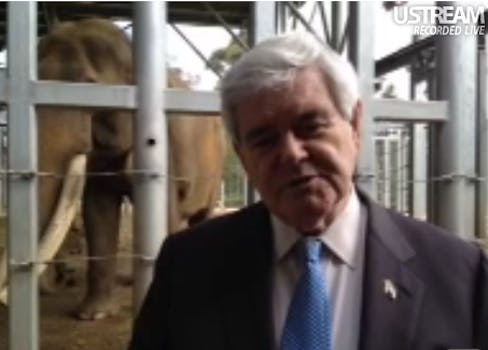 Gingrich at the zoo

Was that a Facebook Town Hall or just another installment of Newt Gingrich Home Videos?

On Tuesday, Gingrich’s Facebook page featured a section titled Facebook Town Hall, but what you saw when you clicked the link was just a shaky, seven-minute iPhone video of Gingrich wandering around the San Diego Zoo; at least for the first few minutes. After that, he stood in front of an elephant and made a quick statement about the federal budget released by the Obama administration this week.

That was the entire Facebook Town Hall, which was supposedly recorded live, and something Gingrich said will become a regular thing. What the difference between the new town hall segment and a regular YouTube video being posted on a Facebook wall, isn’t really clear.

It’s not the first time Gingrich’s Facebook has raised eyebrows this week. On Monday, Mashable reported that Gingrich was the first candidate to switch over to the new Facebook Timeline.

Confusingly, though, Gingrich maintains a personal profile and a brand page, the latter of which wasn’t in the advertised Timeline format—and will never be, since Facebook has said brand pages won’t get the Timeline treatment.

But to be honest, most people probably don’t care about Gingrich changing his Facebook format. Everyone just wants to know: What tourist trap will he show to his Facebook friends next?