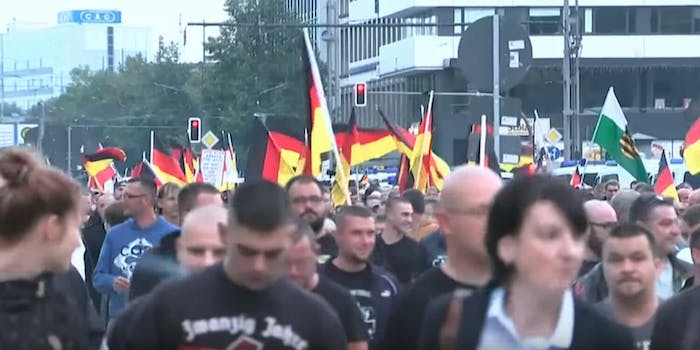 The website was a ruse to 'honeypot' the neo-Nazis.

A collective of German artists revealed on Wednesday that a website pretending to crowdsource help in identifying far-right, anti-immigration protesters was in fact set up to “honeypot” neo-Nazis.

As part of the Special Commission Chemnitz campaign, following violent far-right riots in the German city of Chemnitz, activists and artists of the Center for Political Beauty (ZPS) encouraged citizens to out any neighbors and acquaintances they spotted in pictures taken at the protests.

The campaign immediately sparked a media debate, aided by ZPS, over whether the website controversially violated privacy rights. With that, far-right demonstrators began nervously checking whether they’d been doxed by entering their own name and accomplices’ names into the search bar.

The whole front was dropped this week, however, when the website was abruptly swapped out for a holding page emblazoned with the words: “Thank you, dear Nazis.”

“We built a website with one single goal: To get you to deliver your entire network yourselves without even noticing it,” ZPS wrote. “Using the search function you shared more with us than publicly available sources ever could have revealed.”

The group went on to explain how it had recorded search terms entered by users and from that created a list of potential far-right supporters. Each visitor, it said, entered an “average of 6.72 friends or acquaintances.”

Researching that list, using network analysis and data visualization, the activists were able to evaluate each person’s associates and identities fairly easily.

“This is the most relevant set of data on right-wing extremism that currently exists in Germany,” ZPS founder Philipp Ruch said in an interview with German news agency EPD.

The group claims to have identified around 1,500 individuals who participated in Chemnitz demonstrations.

ZPS, the group behind the action, has risen to notoriety in Germany for its creative and provocative campaigns.

After Björn Höcke, head of right-wing Alternative for Germany (AfD) political party, said that Germany was “crippled” by its “stupid” politics of Holocaust remembrance last year, ZPS moved into a house in his neighborhood and set up a replica of the Holocaust memorial on his front lawn.

This latest stunt, though, is proving extremely popular with U.S.-based antifa chapters who seem pretty inspired by it.