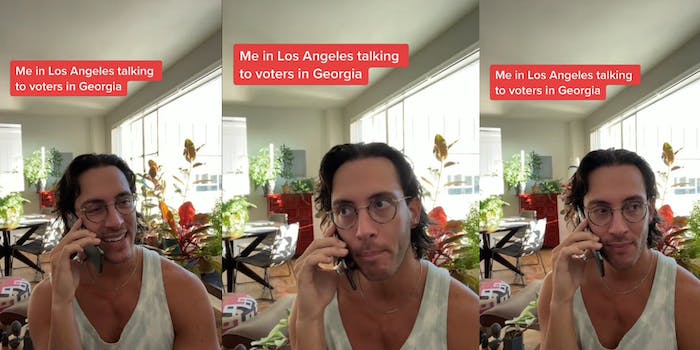 The Georgia GOP and David Perdue have commented on it.

A viral TikTok is causing Georgia Republicans to call out “costal elites” trying to influence the upcoming runoff elections that will determine which party controls the Senate.

The TikTok, which has been called “patronizing” and “insulting” by numerous Twitter users, is also being used by state Republicans as a way to bash Democrats ahead of the runoff election.

At the end of the video, he stares at the camera and says “whatever it fucking takes,” in reference to getting Democrats elected in the runoff election.

The Georgia GOP’s official account joined in on the criticism of the video, saying that it is “what the coastal elites in Washington and California (who are trying to influence the #GASen runoffs) think of Georgians.”

Sen. David Perdue (R-Ga.) also commented on the video, calling it “offensive” and “pathetic” and echoing how it shows how “elites view the people of Georgia.”

But besides the Republicans latching onto the video, a number of people online also had opinions about it. While some people thought the TikTok was humorous, others thought it had “sneering contempt.”

With two seats at stake, the Georgia runoffs will decide which party controls the Senate for the next two years.