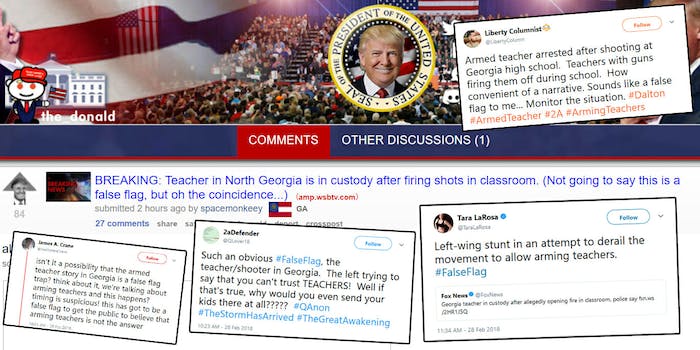 On Wednesday, a teacher in Georgia was taken into custody after there were reports of shots fired within Dalton High School in Dalton, GA.

Naturally, the incident caught the attention of several media outlets in light of President Donald Trump‘s controversial suggestion to arm hundreds of thousands of teachers in the wake of the school shooting at Marjory Stoneman Douglas High School in Parkland, Florida earlier this month where 17 people were killed.

But the incident quickly attracted numerous conspiracy theorists online who declared the incident a “false flag,” an incident that is carried out to make people think a particular person or group is responsible for an attack. More colloquially, the term is used to refer to an incident that is arranged by some shadowy government force intent on shifting the popular narrative. The Sept. 11 terrorist attacks and even the Sandy Hook shooting were both accused of being “false flag” incidents by various people.

The incident in Georgia on Wednesday was no different, as many people on Twitter seemed to think the teacher who was arrested was only doing so because of Trump’s controversial—and apparently unpopular—idea of arming teachers and staff members in schools.

The tweets were hardly the only ones. One Twitter user even tried to claim there was no Dalton High School in Georgia, claiming the “Deep State must thing we’re pretty stupid” to believe such a thing.

However, there is very clearly a Dalton High School in Georgia.

On r/The_Donald, a notorious pro-Trump subreddit, a thread began with someone posting a link to a news story about the incident, but with the disclaimer: “Not going to say this is a false flag, but oh the coincidence…”

Several people agreed that the coincidence was too great to ignore.

Many of the “false flag” proponents on Twitter seemed to be ardent supporters of the Second Amendment.

Armed teacher arrested after shooting at Georgia high school. Teachers with guns firing them off during school. How convenient of a narrative. Sounds like a false flag to me… Monitor the situation. #Dalton #ArmedTeacher #2A #ArmingTeachershttps://t.co/lxYAZ6ZaSj

Such an obvious #FalseFlag, the teacher/shooter in Georgia. The left trying to say that you can't trust TEACHERS! Well if that's true, why would you even send your kids there at all????? #QAnon #TheStormHasArrived #TheGreatAwakening

Others just seemed to think the timing of an armed teacher being arrested was “suspicious.”

And with one news Headline, the talk of arming teachers will be squelched.. Amazing… The tactics of the left …#LiberalismIsAMentalDisorder#Parkland#FalseFlag #FakeNews #FloridaSchoolShooting #Deepstate #DeepStateInPanic #POTUS #Trump #NRA #QAnon https://t.co/iQv5K7E9xr

Left-wing stunt in an attempt to derail the movement to allow arming teachers. #FalseFlag https://t.co/BgFvzJiXul

Wow!! They must really think we are stupid.. #FalseFlag