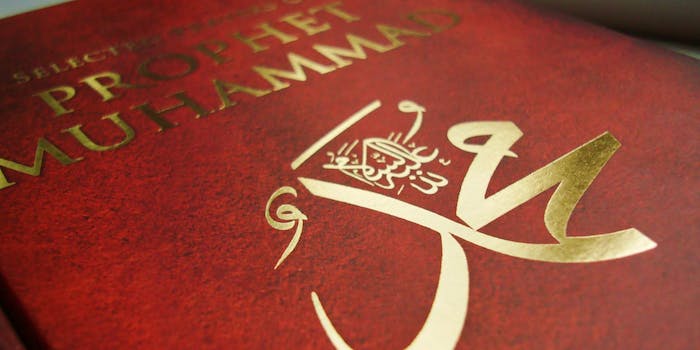 The gunmen were also reportedly shot.

Two people, apparently including one police officer, were reportedly shot at an anti-Islam free-speech event in Texas.

The two gunmen who allegedly carried out the attack were reportedly shot by law enforcement officers, according to local reports.

The Garland, Texas, event, called the Muhammad Art Exhibit, offered a $10,000 prize to the top artistic rendition of the Islamic Prophet Muhammad.

Depictions of Muhammad are forbidden in many sects of Islam and cartoons of the Muslim prophet have been used to justify violence repeatedly in the last decade, including the Charlie Hebdo murders of Jan. 2015 that resulted in 12 deaths.

The shooting happened around 7pm CT, according to security at the event who announced the shooting on a YouTube livestream, which has since stopped broadcasting. Security was also worried about explosives.

Nearby businesses were evacuated and no one inside Garland’s Curtis Cullwell Center, where the event was held, has been allowed to leave, according to the Dallas Morning News.

The identity of the shooters remains unknown.

The event was organized by the American Freedom Defense Initiative (AFDI) and Pamela Geller, a highly controversial anti-Islamist activist known in her own words for protesting “creeping sharia” in America.

“This is a war,” Geller wrote on her website after the shooting. “This is war on free speech. What are we going to do? Are we going to surrender to these monsters?”

While in lockdown, audience breaks into song and prayer. National Anthem an God Bless America pic.twitter.com/ufgR8BOOpr

Update 9:30pm CT, May 3: The suspects, whose identities have not yet been released, reportedly died from injuries sustained from gunshot wounds.

This story is developing.Photo via Rustam Aliyev/Flickr (CC BY SA 2.0)