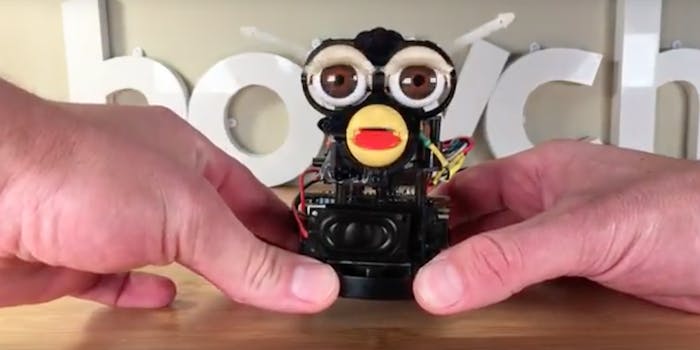 Furlexa is the creepy Furby-Alexa hybrid no one asked for

This isn't the creepiest Furby hack, but it may be the most useful.

If you’ve ever wished your Furby could do more than just be a Furby, you’re in luck. Thanks to one enterprising hardware hacker, you can now combine the smarts of Amazon’s Alexa with the adorably creepy looks of a Furby.

“I thought I’d make Furby a little less annoying and give him an upgrade with a real brain,” Zach Levine explains in his Howchoo blog post on the creation.

Levine used a Raspberry Pi Zero W (a tiny computer), a couple of other electronic components, and Amazon’s open-source Alexa Voice Service software to hack a Furby into the smooth-talking, Alexa-voiced Furlexa.

The result is a little off-putting—but also kind of genius (and clearly the reason Apple will never open-source Siri.)

Earlier this year, some were programming their Furbies to say whatever they wanted by exploiting the toy’s modern incarnation’s Bluetooth Connect platform. In fact, Furby hacking has a rich and vibrant history dating back to its early days, shortly after Tiger Electronics launched the toy in the late 1990s. One Furby hack of yore was to make the toys speak in tongues.

Levine lists out all the tools you need and the steps to take to create your own Alexa-enabled Furlexa here. He used an original 1998 Furby, but if you have some electronics experience, you could certainly use a newer Furby instead.

Either way, be prepared for the one thing even creepier than a Furby: a disembodied Furby.