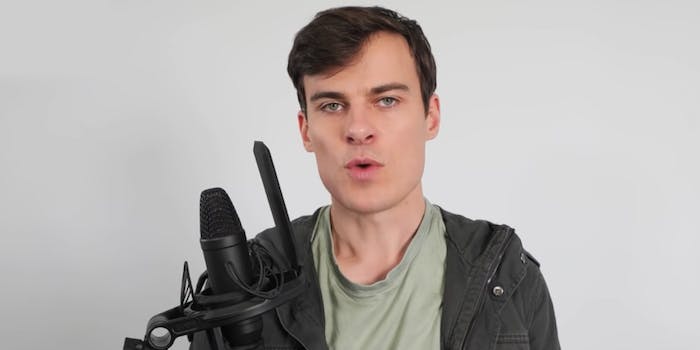 Police are accused of assaulting the man's mother during the arrest.

The producer for a popular channel on YouTube was arrested in Australia this month over allegations of stalking a prominent politician.

Kristo Langker, a 21-year-old employee of Jordan Shanks, who runs the comedic YouTube channel Friendlyjordies, was arrested at his home on June 4 and charged with two counts of “intending to cause fear of physical or mental harm” by way of stalking or intimidation.

The arrest came after a complaint from New South Wales Deputy Premier John Barilaro, who has long been the subject of ridicule from Friendlyjordies. Barilaro is currently suing Shanks for defamation over numerous videos which accuse him of corruption.

Shanks asserted in a video posted to YouTube on Sunday that Langker and his family were assaulted during the arrest by the “fixated persons unit,” officers trained specifically to respond to lone wolf extremists.

“On the 4th of June, plain-clothed armed officers stormed into my employee’s home, violently assaulted his family, nearly killed his dog, pinned him to the ground, handcuffed him, and dragged him into an unmarked police car,” Shanks said.

The charges stem from two incidents in which both Shanks and Langker confronted Barilaro over the ongoing lawsuit.

In the first encounter, Shanks approached Barilaro at a public speaking event while dressed as the video game character Luigi alongside Langker. After being asked to leave by police, Shanks reportedly complied. Langker, however, was accused of “tussling with several persons in an attempt to get closer” to Barilaro, according to the Guardian.

The second incident reportedly occurred on the day of the arrest. Police claim Langker approached Barilaro after attending a funeral for a prominent rugby player and followed him for 200 meters while once again inquiring about the lawsuit.

But lawyers for Langker have pushed back on claims from police that their client followed Barilaro as described. Police argue that Langker’s actions constituted harassment.

“The behaviour of the accused, friendly jordies and the public reach of the friendly jordies media platform has caused the victim to be constantly anxious and in fear of his and his families [sic],” police said.

Langker’s legal counsel also believes a warrant has been issued for Shanks and that the YouTuber “may be in danger of imminent arrest.”