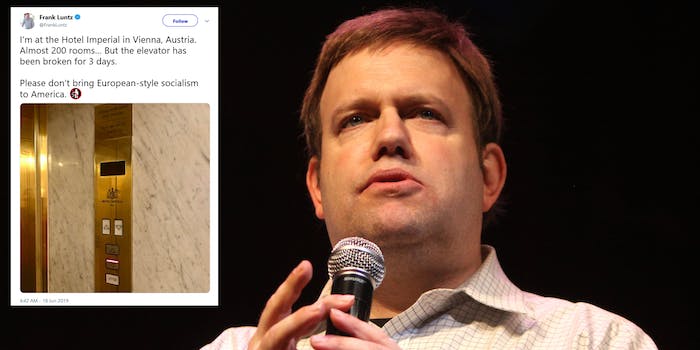 Everything is socialism, apparently.

A tweet from Frank Luntz, a Republican insider and pollster, that compares a broken elevator in Austria to socialism is being widely derided online.

The tweet, which follows a hot new trend among Republicans to label everything “socialism” as the 2020 presidential election begins to kick into gear, had more than 2,500 replies as of Tuesday morning.

“I’m at the Hotel Imperial in Vienna, Austria. Almost 200 rooms… But the elevator has been broken for 3 days. Please don’t bring European-style socialism to America. 🚯,” Luntz wrote.

I’m at the Hotel Imperial in Vienna, Austria. Almost 200 rooms… But the elevator has been broken for 3 days.

Luntz has been informally advising the White House due to his friendship with acting Chief of Staff Mick Mulvaney, according to Politico.

The tweet attracted a number of jokes—with a number of people pointing out that the hotel is owned by Marriott, an American-owned hotel chain.

I've lost track of the number of times the escalators in the DC metro break but OK…. https://t.co/c7FZM9uIkL

Add "elevators in privately-owned hotels" to the "everything is socialism" list https://t.co/qLdHkZv97D

But Luntz isn’t the only Republican who has begun labeling everything that bothers them “socialism.”