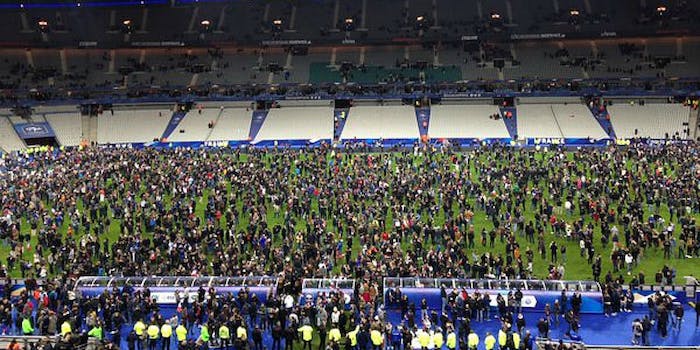 With the national teams of Germany and France playing in an international friendly game of soccer on Friday evening, the city of Paris was under siege with shootings and explosions occurring at multiple sites in the city.

One of the sites included the Stade de France, and television coverage of the match was interrupted by a loud explosion, reportedly one of either two or three that occurred near the stadium. French president François Hollande was reportedly in attendance at the game.

After the game was complete, fans flooded the field.

Some people still singing at Stade de France, but general feeling of nausea has gripped stadium amid news of night of bloodshed in Paris.

Stade de France is full of fans as they run onto the pitch. Hardly surprising that they don't want to go outside at this stage. Terrifying.

Paris’s deputy mayor told CNN that at least three were killed in the explosions by the stadium. Hollande was evacuated from the game and reportedly held an emergency meeting.

“There were two really loud bangs and they were enormous. I thought it was coming from inside the stadium but someone told me later that they were grenades thrown outside at a restaurant,” an eyewitness told  the Telegraph, via the Washington Times.