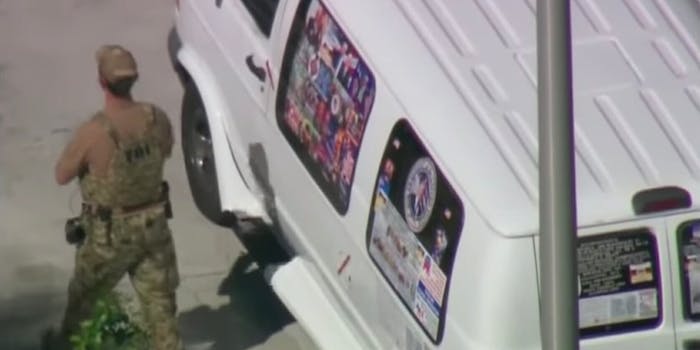 The stickers showed Democrats in crosshairs.

Fox News on Friday denied censoring footage showing political stickers on the van allegedly belonging to Cesar Altieri, who was arrested in association with the mailing of “suspicious packages.”

Randi Mayem Singer, a screenwriter, tweeted Friday morning that the news network was “blurring out the stickers on the van” in its TV coverage, garnering enraged responses. Singer did not immediately respond to the Daily Dot’s request for comment.

In a statement to the Daily Dot, a Fox News spokesperson said footage of the van was not altered.

“We’ve repeatedly run aerial, stills and affiliate footage of the van throughout the day, all of which was shown without any editing,” the spokesperson said. “This is in fact a hoax.”

CNN and MSNBC both aired similar footage on Friday.

Photos of the van were posted to Altieri’s Twitter account on Oct. 12. Other images of the van cropped up on social media and in multiple news reports. The images showed stickers on the van included images promoting President Donald Trump along with photos of Democratic leaders overlaid with crosshairs.

CBS News is reporting the alleged bombers van was covered in images of prominent Democrats with crosshairs over them pic.twitter.com/Oksd8rcZuA

@WPLGLocal10 I have pictures of this van. I saw this van in Hollywood at a stop light o eve and thought this was strange. pic.twitter.com/ARlel48Erh

A report on Fox News’ website also acknowledges the nature of the images: “Sayoc’s white van, which was plastered with stickers of Trump, the presidential seal and other political signage, as well as cross-hair symbols over the likes of Hillary Clinton and anti-liberal memes, was seized by authorities and taken to a secure facility.”

Sayoc was charged Friday with five federal crimes, including mailing explosives, in relation to the pipe bombs that were sent to prominent Democrats, including former President Barack Obama and Hillary Clinton. A pipe bomb that was found at CNN’s offices on Thursday was believed to have been marked with an Islamic State group flag.