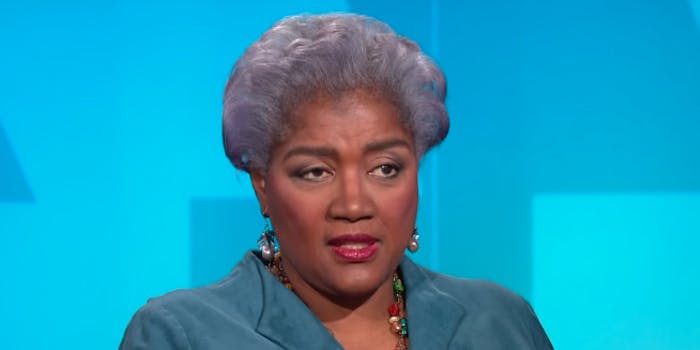 Trump supporters are using Donna Brazile as an excuse.

Brazile’s appointment was announced via a press release issued on Monday and throughout the week there’s been backlash on Twitter and Reddit.

Users on notorious pro-Trump Reddit community r/The_Donald, reacting to the news, declared that “the end of Fox News has begun” and that the network was “now untrustworthy.”

This follows outrage after the network pulled Judge Jeanine Pirro’s show over her comments about Rep. Ilhan Omar (D-Minn.).

Now, conservatives, see Brazile is a step too far. And it’s not just because she’s more than just another liberal talking head.

On Twitter, for instance, a large part of the backlash focused on Brazile’s previous dismissal from CNN. In December 2016 it was revealed that, as a CNN contributor, she had leaked information to then-Democratic presidential hopeful Hillary Clinton about the kind of questions she was set to face in the televised debate.

And anyone who helps Hillary is verboten in Trump-land.

She was rejected after she colluded with Hillary Clinton's campaign in 2016! @FoxNews WE’RE DONE!

So @FoxNews has suspended Judge Jeanine, hired Donna Brazile (DNC cheater) and added Paul Ryan (RINO) to their board. Who else feels like they are turning into another CNN? #FoxIsTurningLeft

Brazile’s appointment also comes just days after Trump publicly blasted two of the network’s anchors asking whether they had been “trained by CNN.”

Were @FoxNews weekend anchors, @ArthelNeville and @LelandVittert, trained by CNN prior to their ratings collapse? In any event, that’s where they should be working, along with their lowest rated anchor, Shepard Smith!

Since then his supporters have been picking apart Fox News’ coverage, particularly that deemed critical of Trump, and attacking the outlet’s credibility. Others declared they’d switch to rising rival One America News Network, home to host Jack Posobiec and known for its pro-Trump coverage.

What is happening now:

Whether Fox News faces any real threat remains to be seen. For more than 14 years the network has remained the most-watched channel in the country and the primary partisan news source of Republican voters.

What is for certain is that many of the president’s hardened supporters, who followed his campaign via internet-native outlets like Breitbart News, are turning their back on moderate Fox News in favor of new upstart networks that are reliably sympathetic to the administration.