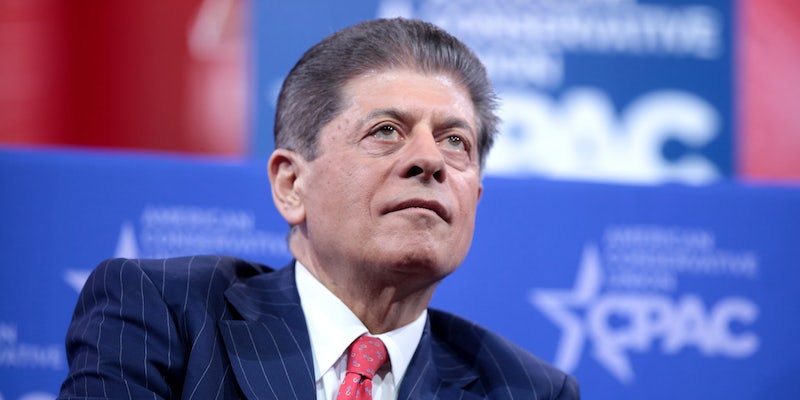 Napolitano’s suspension, first reported by the Los Angeles Times, comes amid ongoing fallout over Trump’s repeated but unsupported claims that Obama wiretapped his phones at Trump Tower. The Fox News analyst added a twist to the story by claiming on March 14’s episode of Fox & Friends that “three intelligence sources have informed Fox News” that British intelligence agency GCHQ helped Obama carry out the alleged surveillance. Napolitano repeated this assertion in a March 16 column for FoxNews.com.

White House Press Secretary Sean Spicer read Napolitano’s on-air claim verbatim during the March 17 press briefing in response to the bipartisan Senate Intelligence Committee leadership’s announcement that they found “no indications that Trump Tower was the subject of surveillance by any element of the United States government either before or after Election Day 2016.”

While Napolitano’s use of anonymous sources is not notable—many outlets use unnamed sources—the veracity of his claim is. After the British government called Napolitano’s claim “ridiculous” and “nonsense,” Fox News anchor Shepherd Smith on Friday refuted the former judge’s reporting. “Fox News knows of no evidence of any kind that the now-president of the United States was surveilled at any time, in any way,” Smith said.

Napolitano stood by his claim on Sunday’s MediaBuzz program, saying he “accurately” reported what his sources told him, “and I do believe the substance of what they told me.”

Also on Monday, FBI Director James Comey and NSA Director Adm. Mike Rogers told the House Intelligence Committee under oath that the intelligence community has no evidence that Obama spied on Trump.