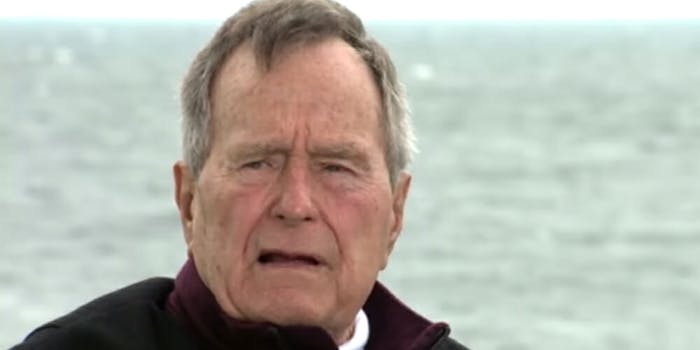 An infection has spread to his blood.

Former President George H.W. Bush has reportedly been hospitalized due to an infection. His wife of 73 years, Barbara, died last week.

A statement from spokesman Jim McGrath said Bush was taken to Houston Methodist Hospital on Sunday “after contracting an infection that spread to his blood.”

Statement by the Office of @GeorgeHWBush on President Bush's health. pic.twitter.com/8UkB53JHqD

CNN reported that Bush, who suffers from a form of Parkinson’s disease that has left him unable to walk, was admitted to the intensive care unit but has been “stabilized.”
Former first lady Barbara Bush died on April 17, and her funeral was held Saturday with the Clintons, the Obamas, Melania Trump, and members of the Bush family in attendance.
George H.W. Bush was elected president in 1988 and served one term. At 93, he has lived longer than any other U.S. president.
H/T BuzzFeed News
Share this article