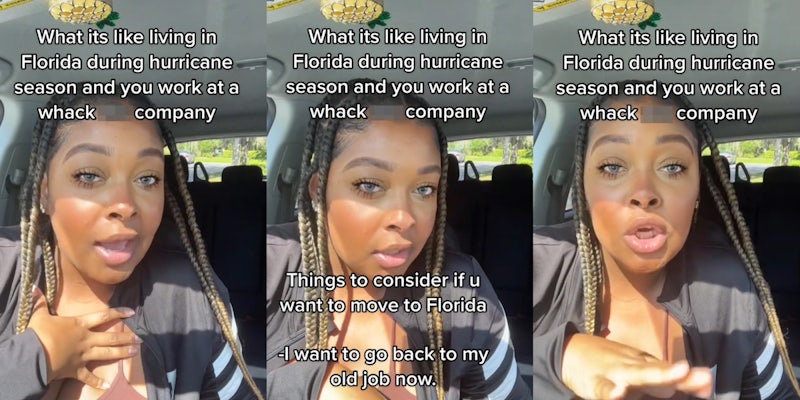 ‘You’re on your own’: Florida worker says her ‘billion-dollar’ company won’t give her PTO for not coming in during hurricane

'You're literally just a number to them.'

A Florida-based woman claimed on TikTok the company she works for refused to give her and her colleagues paid time off (PTO) during Hurricane Ian, which AccuWeather predicts will hit the Florida Gulf Coast by Wednesday.

In a clip that has been viewed over 79,000 times since it was posted on Sept. 27, Ciara, who posts under the TikTok name @keepcalmvacation, wrote in the text overlay: “What its like living in Florida during hurricane season and you work at a whack ass company.”

@keepcalmvacation Im making good $ + commission but my job will take my PTO because they are too cheap to pay their employees for a hurricane…. Time for me to make a job change. #rant #floridarant #hurricane #tropicalstorm ♬ original sound – Your Travel Plug – Ciara ✈️

In the video, Ciara sits in a car as she talks directly to the camera. She recalls that when she arrived to work that day, higher-ups said during a meeting: “‘There’s not gonna be any hurricane pay.’” Ciara is referring to the fact that her company’s policy is to not pay its workers if they can’t make it to the office, regardless of any ongoing natural disasters.

Not only would the company not be paying its workers, Ciara says the company was going to take available PTO for the hours and times she missed due to the hurricane. Her higher-ups basically told her, “You’re on your own.”

“This just goes to show me, I’m working at the wrong company,” Ciara goes on to say. “You work at these jobs, and they don’t care about you. You’re literally just a number to them. But you’re a billion-dollar company, and you can’t afford to pay your employees for the one to two days missed because of the hurricane in a national state of emergency?”

Users in Ciara’s comments were incensed on her behalf. “I don’t get paid Hurricane pay either. It’s frustrating,” said one user. “They don’t care! We are REPLACEABLE like yesterday,” another dejected worker said.

“Stuff like this influences employees to do the bare minimum,” one user said, referring to the recent phenomenon of “quiet quitting.” The user also suggested that businesses “let people know they’re appreciated and valued.”

“PTO shouldn’t be used for things out of ur control like natural disasters,” one person said, referring to the hurricane. “Right and it’s out of your control not your fault,” another person echoed. “These companies wonder why there’s no morale smh,” said another.

One user suggested that hurricane pay “should be a law” in Florida because of the frequency of storms that the state’s residents experience. But sadly for Ciara and the rest of the Floridian workforce, it’s not a law for companies to pay you during natural disasters.

“Yes if you are hourly and not salaried sadly it’s true. It’s up to the employer to be nice to their employees,” one user explained. According to Business Observer, even if their workplace is closed due to a natural disaster, Florida employees are entitled to their full salary if they work during the week. But if the office is open and employees aren’t present, even if they can’t make it due to a hurricane, the employer can require the worker to use their PTO, as was the case for Ciara. “My [suggestion is to] look for another job,” the same user said.

Luckily for Ciara and her colleagues, her company reversed its decision in the end. In a follow-up video, Ciara tells her followers: “Update, my job is gonna be paying us hurricane pay so I’m grateful for that.”

Ciara did point out that companies shouldn’t expect employees to use their earned PTO to cover natural disasters like the hurricane “when the company can afford to pay us.” Although it isn’t a law, Ciara says that “It’s the right thing to do.” She ends the update saying she hopes other companies will follow suit and urges everyone to stay safe.

The Daily Dot reached out to Ciara via email.