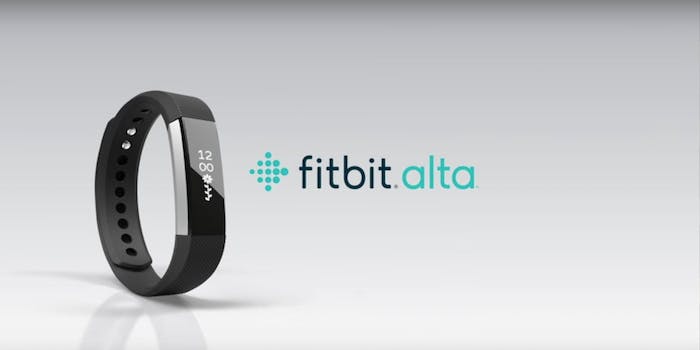 You got fashion in my fitness.

As its name makes clear, Fitbit is already associated with fitness, but the wearable company is leaning more heavily on fashion with the introduction of its newest product, the Fitbit Alta. The Alta is a return to form for Fitbit following its decision to branch into smartwatches last month with the Blaze. A bracelet-style band gives the Alta a look that is more familiar feel in the crowded field of wearable fitness trackers, but the band is considerably more fashion-forward than the standard, rubbery wristbands.

Alta’s aim isn’t so much to add to the conversation in what it can track, but rather how it looks while it’s tracking. The device itself, with a touch-sensitive OLED display, can be swapped in and out of a variety of bands that aim to make the Alta a part of any wardrobe.

The new options for housing the stainless steel tracker will be available at a variety of price points, with current options priced at $60 and $100.

As far as functionality goes, there’s not a whole lot new happening with the Alta. It does offer Fitbit’s “smart track” feature that was introduced with the Blaze—a function that automatically identifies a workout and begins tracking it. It can also alert users of notifications on their smartphone with a vibration.

There are no optical heart rate sensors or GPS built into the Alta, which boosts battery life up to five days but does continue the requirement for the device to be tethered to a smartphone. The wearable does track daily activity levels, including steps and sleep, making it a pretty standard, everyday tracker.

Priced at $130, the Fitbit Alta effectively replaces the standard Charge, which occupies the same price point and has considerable overlap in functionality. The Alta begins shipping in March of this year.

Fitbit, the tracker of choice for the President of the United States and invasive college fitness programs alike, already claims 79 percent of the fitness tracker market according to the NPD Group with 30 million devices sold to date. With the Alta, they’ll be looking to add to that total.