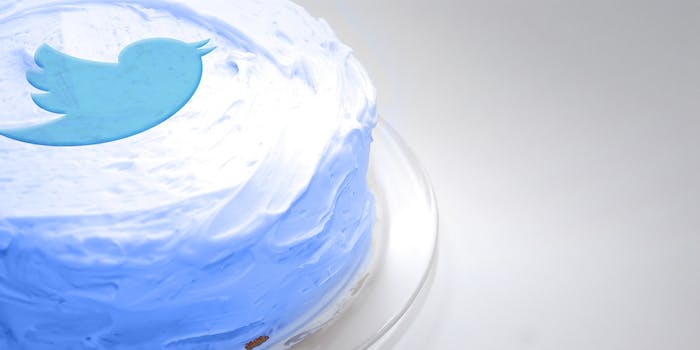 It’s Twitter’s birthday, and here’s how you can find your first tweet

Here’s to many more years of RTs and favs.

Twitter turns eight years old today. Like most 8-year-olds, it’s a young, constantly moving mishmash of hilarity, nonsense, and unexpected poignancy, and when it crashes, it crashes hard. Twitter is growing up so fast, guys. So fast.

If Twitter’s birthday has prompted you to take a look back on your time spent microbloggin’, don’t worry: The company anticipated this. Twitter released a tool called #FirstTweet that lets you easily look up your first tweet. No more manually scrolling through thousands of thought-snippets for you. Or any of us.

#FirstTweet isn’t as sentimental a birthday gift as Facebook’s maudlin Look Back videos. Maybe because Twitter is waiting until its 10th anniversary to pull out the big guns—or maybe because Twitter’s a different kind of network. Twitter does accumulate and archive your tweets, yes, but there’s a primacy placed on users generating new content that’s unlike Facebook’s scrapbooky feel. Plus, if you want to see your most popular tweets, there’s no need to wait for Twitter to make a gauzy compilation montage. You can just sign up for FavStar.

Some of us tried #FirstTweet to see how their tweet game has improved.

Some of us tweeted about joining Twitter, as one will:

@DougBenson i hope you’re happy – now i have a damn twitter account. all because Doug hates screaming babies &c., &c..

Some of us tweeted about music.

Some of us tweeted what we were doing:

I just ate a sandwich.

And one of us who still has trouble figuring out how inappropriate she can be in public tweeted this:

Would you rather have a massive, patchouli-scented 70s bush or nipples that look like latkes?