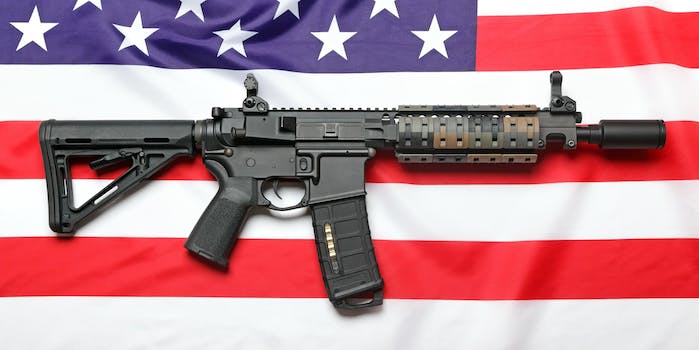 'I am prepared to stand on the Senate floor and talk about the need to prevent gun violence for as long as I can.'

On Wednesday morning, Democratic senators launched a protest on the floor of the Senate to protest Congress’s inaction on passing new gun control legislation in the wake of the tragic shooting at a gay nightclub in Orlando, the deadliest in the nation’s history.

Connecticut Sen. Chris Murphy started at around 11:20am ET, while the Senate was in the midst of a debating a spending bill, which Murphy and other Democrats had hoped use as a vehicle for attaching new gun control rules—specifically, preventing people on the FBI‘s terrorist watch list from legally buying guns and implementing universal background checks on the all firearms purchases.

“[The Senate should] not proceed with debate on amendments to this bill until we have figured out a way to come together on, at the very least, two simple ideas,” Murphy said. “I’m going to remain on this floor until we get some signal, some sign that we can come together on these two measures, that we can get a path forward on addressing this epidemic in a meaningful, bipartisan way.”

I am prepared to stand on the Senate floor and talk about the need to prevent gun violence for as long as I can. I've had #Enough

Murphy and his colleagues are not technically holding a filibuster, at least according to the formal definition of the procedure, since they’re not blocking a vote on the spending bill. A motion to proceed was already passed by a voice vote. However, they are preventing any other senators from making amendments to the bill, which, as the Hill notes, is part of the process of the legislation ultimately coming to the floor for an up-or-down vote.

Sen. Diane Feinstein (D-Calif.) introduced a bill in February that would allow state attorney generals to block the sale of a gun to suspected terrorists using the same standards already in place to add new people to the FBI’s terrorist watch list. A representative from Feinstein’s office told the Daily Dot that the bill would also give someone who was mistakenly barred from buying a gun the ability to learn why they’re denied.

As Senate Democrats make their case as to why suspected terrorists shouldn’t be allowed to to purchase guns, 2016 Republican presumptive presidential nominee Donald Trump plans to meet with the NRA in an effort to convince the nation’s preeminent gun rights organization to support prohibiting people on the terror watch list from obtaining guns.

“We are happy to meet with Donald Trump,” an National Rifle Association spokesperson wrote in a statement. “The NRA’s position on this issue has not changed The NRA believes that terrorists should not be allowed to purchase or possess firearms, period. Anyone on a terror watchlist who tries to buy a gun should be thoroughly investigated by the FBI and the sale delayed while the investigation is ongoing.”

“If an investigation uncovers evidence of terrorist activity or involvement, the government should be allowed to immediately go to court, block the sale, and arrest the terrorist,” the statement continued. “At the same time, due process protections should be put in place that allow law-abiding Americans who are wrongly put on a watchlist to be removed.”

Democrats attempted to pass legislation to this effect last year, but the move was unable to overcome opposition by Senate Republicans. Senate Majority Leader Mitch McConnell (R-Ky.) has indicated that the GOP is, at present, open to imposing this type of legislation, as long as it comes with due process safeguards to prevent people from being unfairly prevented from buying a gun.

The legislation would undoubtedly represent a step toward reducing the number of guns in circulation. But it is important to recognize the #NoFlyNoBuy avenue the Senate Democrats are pursuing leaves many bureaucratic gaps wide open.

Though the FBI’s terrorist watch list once contained the Orlando shooter’s name, Omar Mateen had been removed well before his attack. He was free to purchase his weapons and subsequently spray a hail of bullets in a LGBT nightclub, killing at least 49 patrons and injuring 53 others.

In 2015, the Washington Post reported that there were about 700,000 people on the terrorist watch list. Between 2004 and 2014, those suspected terrorists attempted to purchase guns from American dealers on around 2,233 occasions. Though they were ultimately successful in 2,043 cases (91 percent of the time) these numbers are still minuscule in comparison to overall gun sales.

Before the end of 2015, the Federal Bureau of Investigation had processed nearly 20 million background checks of people looking to purchase guns that year. The high volume is a heavy toll for the limited number of FBI employees who, by law, must complete a person’s background check within three business days. If the government fails to finish the check in time, the gun purchase may proceed regardless.

As the New York Times notes, gun sales spike in the aftermath of terrorist attacks. Another notable spike occurs during the holiday season. Speaking to CNN about Black Friday sales, FBI spokesman Stephen Fischer said, “The challenge is to have staff keep up with this volume. … We do that by limiting personal leave, asking employees to work extra shifts and reutilizing former … employees to serve in [the National Instant Criminal Background Check System] during this busy period.”

But that isn’t the only roadblock the FBI faces. In 2013, according to Newsweek, 186,000 background checks, or 512 a day, fell through the FBI’s review system. This happened because states either failed to hand over residents’ complete criminal and mental histories, or did not provide the information in time.