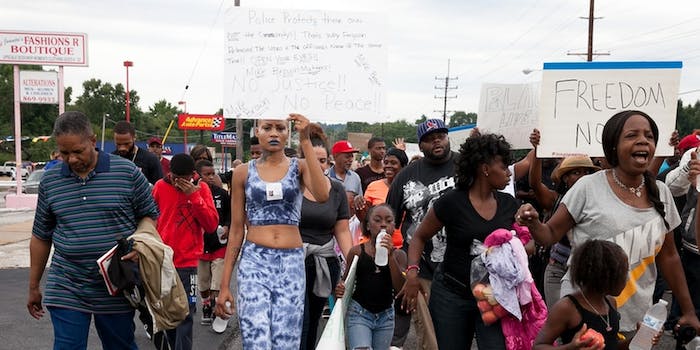 There is no time in Ferguson, Mo.

The concept of time no longer exists in Ferguson, Mo.

For 29-year-old hip-hop artist and activist Haiku, all that remains is night and day—whether “we are going to war or are we celebrating.”

“It’s so extreme,” he told me from his home in Florissant, the town right next to Ferguson. “It’s gotten to a point where I feel like it’s always been like this. And it will always be like this. There will never be a return to normal, and I’m not going to even remember what normal is.”

Sunday was the first night since Aug. 10 that Haiku has returned home before midnight. It’s the first night that the sounds of screaming, the hiss of tear gas canisters, and car horns haven’t left his ears ringing.

Since Aug. 9, the day Ferguson police officer Darren Wilson shot and killed 18-year-old Michael Brown, Haiku has taken the role of Ferguson’s unofficial digital historian. He’s chronicled the ongoing protests on Instagram, where he’s given his 7,300 followers an intimate look at Ferguson’s good—thousands of people peacefully protesting in the streets with signs featuring Brown’s face—and its bad, like a gruesome photo of a woman after she was shot with a rubber bullet.

This is why I sought Haiku out Saturday, when I visited Ferguson. I wanted to know what it was going to take for the daytime protests and nighttime skirmishes with police to end.

My quest began at the parking lot of Andy Wurm Tire & Wheel, where mechanics tinkered away on a red Ferrari. At the edge of the lot, some 30 protesters huddled under a tarp, trying to stay dry from the rain. Across the street stands the headquarters of the Ferguson Police Department.

As the occasional police cruiser drove away, officers saw Sharon Smoot and her 4-year-old granddaughter, Madison Johnson, with their hands up, a symbol used in rememberance of Brown, who is said to have died, unarmed, with his hands raised in the air. Sitting on the pavement in front of both of them were two photos of President Barack Obama.

“I just don’t feel it was right to kill an unarmed black man—not only a black man, but an unarmed person,” Smoot told me. “This is my first day coming out here, but it won’t be my last.”

As the rain pelted the protesters, Eugene Gillis, 56, walked up behind everyone to play his trumpet.

Around 12:30pm, I met up with Haiku in the parking lot. He introduced me to freelance photographers Rick Majewski and Anastasia Page, who had driven down from Chicago that morning.

Together in Majewski’s old Honda Accord, we followed Haiku to the destroyed QuickTrip (QT) gas station, which has been dubbed “ground zero” for the protests. The Accord had lost its tailpipe during the two mile journey from the Ferguson police station to the QT.

“Everyone take a sip of water,” Page told us all as we piled out of the Accord. “We’re going to be here long.”

We followed a group of protesters from the Israel United Christ Church toward the home of Brown’s grandmother, where the teenager was staying this summer. Before we could make it to the place in the street where Brown was gunned down, we were stopped by a huge group of people chanting, “Hands up, don’t shoot!” and “What do we want? Justice!”

The chants continued without pause for more than a mile to St. Mark’s Episcopal Church. That’s when some protesters began singing the classic hymn, “We Shall Overcome.”

In the parking lot behind the church, Rev. Jesse Jackson shared a prayer with protester. Some in the crowd became upset when he called for $100 donations for St. Mark’s. With Jackson’s appearance derailed, a few protesters began playing the drums while women and children danced.

Majewski, Page, and I returned to the QT, where a massive free picnic was underway. Seven different Facebook groups had coordinated their efforts to collect more than 50 cases of water, 30 cases of hotdogs, and 10 cases of burgers to cook up and serve to people for free.

“We just want peace,” picnic organizer Deshon Morris, 38, told me. “We just want everybody to come out and have a good time.”

As we left the QT for the Accord, we saw a group of business owners boarding up their windows. They were in for a long night. The daytime Ferguson is filled with peaceful protesting and a community coming together through music and celebration. The nighttime is something else.

“When the sun goes down, there’s no longer even a protest,” Haiku told me. “There’s no Michael Brown cause. The people at night are using this opportunity to revolt. It has nothing to do with Michael Brown.”

This weekend, Missouri Gov. Jay Nixon implemented a midnight curfew in an attempt to stop the widespread looting that had decimated Ferguson businesses. Yet as the lockdown hour drew near, people only got angrier, Majewski told me. Police wanted people in their homes. The people of Ferguson wanted the police—armed with tear gas, riot shields, and other military-like gear—gone. 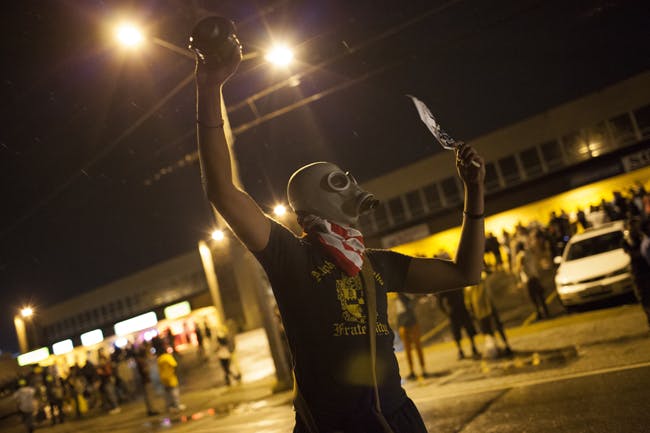 Majewski, who rushed to the front lines on Saturday night, recounted the scene in an email:

“The protesters started slowly to inch their way closer to the police line. Holding their hands up saying, ‘Hands up, don’t shoot.’ About a half hour into the curfew and many times after, the police called out on the megaphone to dispersed or face arrest, the first tear gas canister was fired. Everyone was moving back, fast. A few people tossed the canisters back towards the police. I could taste the tear gas on my mouth, feel my face burn like a sunburn at the beach.”

At least eight people were arrested Saturday night. But that was before police threaten to kill a reporter; before Gov. Nixon called in the National Guard; before an autopsy report revealed Brown suffered at least six bullets to his arm, chest, neck, face, and head.

Haiku believes Ferguson’s “roller coaster ride” of unrest will continue until Wilson is arrested and the heavy police presence is removed. But maybe this isn’t even enough.

“Some say they will protest until he’s convicted,” Haiku said. “There’s no calendar anymore.”