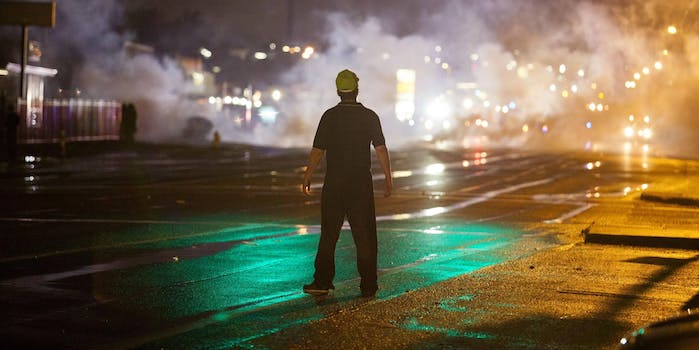 The instantly iconic images of the Ferguson riots

Sometimes pictures tell a story better than words ever could.

The following are some of the most iconic and disturbing images from the protests that rocked the country immediately following the decision by a St. Louis County, Mo. grand jury to not indict Ferguson Police Officer Darren Wilson for the fatal shooting of teenager Michael Brown.

We are updating our report from eyewitnesses at the scene of the protests in Ferguson: http://t.co/WRYP4QShFB pic.twitter.com/IIyLsrOUeC

Owner of #Ferguson Market stands in wreckage of his store https://t.co/4Xy2FUdAQv

Clergy protecting a store after windows were smashed. "Don't do this, we've come too far!" #FergusonDecision pic.twitter.com/Sh19mDEwXE

Once again protesters lie down in the middle of an intersection… This time in the heart of #BeverlyHills #Ferguson pic.twitter.com/FXHGCoiLxm

Rapid fire pistol shots ringing out near this fire https://t.co/y6mwOg1x3J

It's getting heated in New York. #Ferguson https://t.co/iA0rqsEtRS

Scene from above the 580 in #Oakland right now. #Ferguson pic.twitter.com/dPjfh8eKAN

Update 9:35am CT, Nov. 25: This story has been updated with additional images.