In the hours after after a grand jury in St. Louis Country, Mo. declined to issue an indictment against Ferguson Police Officer Darren Wilson for fatally shooting African-American teenager Michael Brown, sparking a destructive riot, the Federal Aviation Administration called for a no-fly zone over the St. Louis suburb for flights under 3,000 feet. 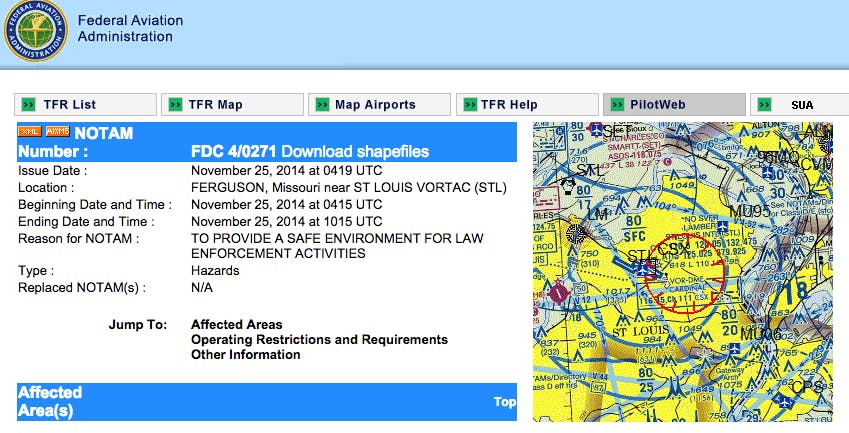 The agency stated that the purpose of the ban is to “to provide a safe environment for law enforcement activities.”

This order is not the first time in recent months that the FAA has blocked civilian aviators from flying over the city. In the days after the initial wave of unrest broke out following the shooting, the FAA put in a similar ban for period of 12 days under a similar justification.

However, a transcript of telephone conversations obtained by the Associated Press showed agency officials stating that the purpose of the ban wasn’t primarily about safety. Instead, the goal was to prevent the media from being able to shoot footage from protests from above.

“They finally admitted it really was to keep the media out,” said one FAA manager. “But they were a little concerned of, obviously, anything else that could be going on.

“[Police] did not care if you ran commercial traffic through this…[temporary flight restriction] all day long,” said another. “They didn’t want media in there.”

Following those revelations, local authorities insisted that the AP’s reporting was inaccurate. “It’s always all about safety,” St. Louis County Police Chief Jon Belmar told CNN. “We don’t have the ability to preclude people out of there for any other reason other than that. Had we just wanted to move the media away from this arena we would have started that on the ground, and that’s not what happened.”

Contrary to some rumors that initially spread on Twitter, Monday night’s ban did not close St. Louis’s Lambert airport; however, authorities are diverting incoming flights.

The no-fly order is slated to stand until 10:15 am CST on Tuesday morning.

FAA spokesperson: "Media is still operating in the airspace over #Ferguson. We are working closely with the two pool cameras."