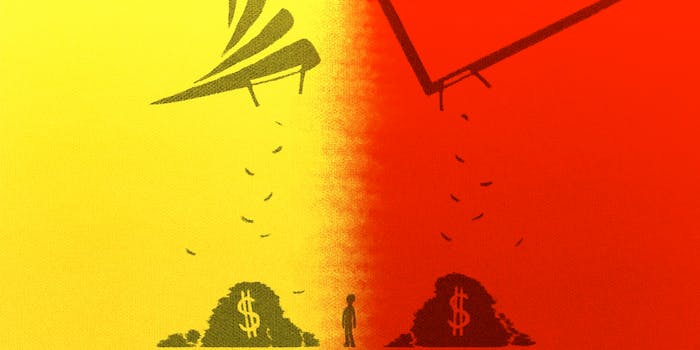 The new penalties bring the total fines against carriers for cramming up to $353 million.

You may be about to get a check from you wireless provider.

Two of America’s top wireless carriers will be paying out millions in fines following a federal investigation into widespread consumer fraud, the government announced Tuesday.

Of that, Verizon must pay back customers a total of $70 million, while Sprint is on the hook to its customers for $50. The remainder of the settlement funds will go to state governments and the U.S. treasury.

“For too long, consumers have been charged on their phone bills for things they did not buy,” FCC Chairman Tom Wheeler said in a statement. “We call these fraudulent charges ‘cramming,’ and with today’s agreements we are calling them history for Verizon and Sprint customers.”

Tuesday’s settlement marks the FCC’s latest crackdown on cramming; cases against the nation’s top four carriers have so far brought in $353 million in penalties. As much as $267.5 million will be paid out to affected customers.

The fraudulent charges from third-party “premium text messaging services” ranged from $0.99 to $14, according to the FCC. Both carriers profited significantly from the practice, with Verizon retaining 30 percent or more of the collected revenues and Sprint taking in about 35 percent.

“Customers who called to complain were often denied refunds, and yet, when the FCC requested proof that the customers had authorized the charges, the carriers were unable to prove that these services were ever requested,” the FCC said.

Additionally, the FCC’s Enforcement Bureau said it has secured strong consumer protections through the settlement. Carriers will no longer be able to offer commercial third-party text messaging charges, will be required to offer a free service for customers to block all third-party charges, and must obtain informed consent before any such charges can be made.

“Consumers rightfully expect their monthly phone bills will reflect only those services that they’ve purchased,” said Travis LeBlanc, Chief of the FCC’s Enforcement Bureau. “Today’s settlements put in place strong protections that will prevent consumers from being victimized by these kinds of practices in the future.”

The FCC advised consumers to review their phone bills carefully and contact Sprint and Verizon if they suspect their carrier of adding unauthorized charges.