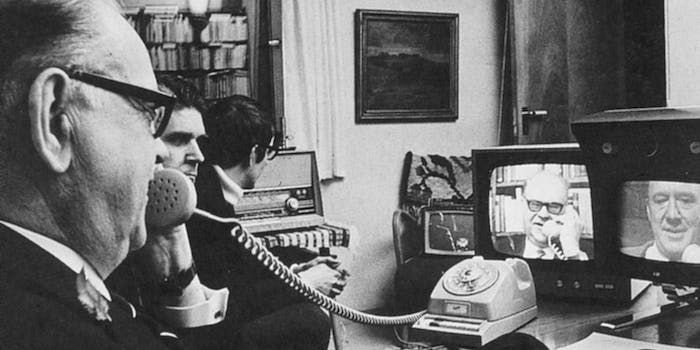 According to the New York Times, the White House is reportedly on the cusp of backing a plan to allow the FBI to monitor Internet communications.

The FBI already unabashedly wants to monitor Internet communications in real time, but it could get worse.

According to the New York Times, the White House is reportedly on the cusp of backing a plan to make the practice legal.

Such a plan would force any online service that provides encryption—say, an email provider or Skype—to be able to share what users are saying if they’re served with a court order. In other words, “encryption” would be a relative term.

The plan would make use of the loose legal interpretation of “wiretapping.” Originally, that meant the practice of government agencies listening in on private phone calls. But the term now refers to a host of definitions of government surveillance, like how, thanks to a classified court ruling, agencies like the FBI can monitor citizens’ emails without a warrant.

An FBI representative downplayed the significance of the plan, which the agency has openly supported since at least 2010. He noted it wouldn’t give the agency new powers, just ensure websites would be compliant with surveillance agencies’ requests.

“This doesn’t create any new legal surveillance authority,” Andrew Weissmann of the FBI’s general counsel told the New York Times. He added that it wouldn’t “do anything except update the law given means of modern communications.”

In regards to the ability to see online communication in real time, Weismann said “other countries have that.”

The Times report didn’t clarify the Obama administration’s support or near-support, except to say it was considering submitting it to Congress. A White House representative told the Daily Dot that such a plan “and how best to ensure our legal authorities keep pace with technological advancements have been discussed for some time now,” but that “[w]e have nothing new to announce on that process today and refer you to DOJ for more information.”

However, according to some experts, forcing such standards into law is completely unnecessary. A 2012 report by the ACLU’s Christopher Soghoian found that government agencies encountered encryption in 109 instances of attempted online wiretapping from 2001-2011, “and not a single instance in which the encryption prevented law enforcement of?cials from obtaining the contents of the communications.”