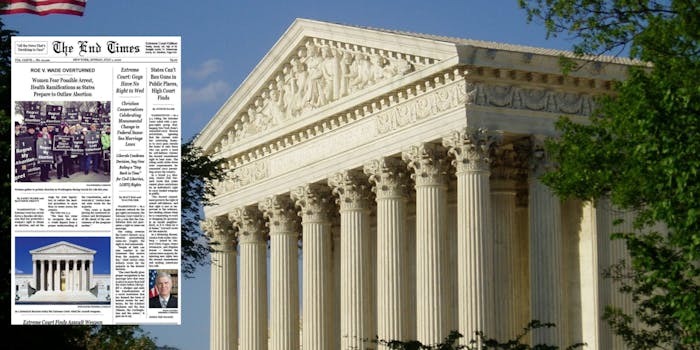 The front page highlights some decisions liberals fear could be in jeopardy.

A gun reform advocacy group released a fake front page of a newspaper showing the liberal fear of what could come after President Donald Trump appoints another justice to the Supreme Court—shifting the court to the right for the foreseeable future.

Guns Down, a gun reform group that was formed in 2016, published the fake front page on Sunday evening. The paper, called the End Times, has headlines for several things that left-leaning Americans fear will happen if the Supreme Court has a conservative lean in the future.

WARNING: Another Trump justice will destroy our values and our country. They would make the future unrecognizable. pic.twitter.com/W4KNdwGgN5

Guns Down did not immediately respond to a request for comment by the Daily Dot.

Trump will be able to nominate a Supreme Court justice after Anthony Kennedy announced his retirement last week. The president said he will announce his pick on July 9.

Shortly after Kennedy’s retirement announcement, some people online pleaded with the president to choose Merrick Garland to take the post—the nominee former President Barack Obama put forth before the 2016 election and was blocked from a hearing by Republicans in Congress.