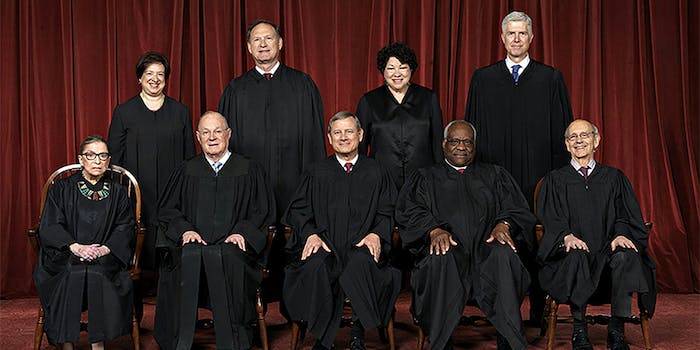 Mitch McConnell won and America may never be the same.

The Republican Senate Majority Leader made a bet on delaying Merrick Garland’s confirmation just in case the GOP could take back the White House in 2016. He was right. Trump confirmed the conservative Neil Gorsuch, giving Republicans an anchor on the court for the foreseeable future. And the pain is already being felt across the country.

This week, the Supreme Court issued a series of narrow decisions with a 5-4 majority including Gorsuch that will functionally transform American life.

These decisions affect a variety of people across the country, but the combined force of these opinions is a clear signal that this court intends to take power from those who don’t have much and funnel it to those who already have the greatest measure of control over American life.

Pregnant women, public school teachers, disenfranchised voters, and Muslim-Americans were all dealt significant blows by the court. And the retirement of Justice Anthony Kennedy (who sided with the conservatives in all of these decisions) guarantees that the Supreme Court will be a haven for reactionary policies for years to come.

In terms of immediate impact, this case might have the most profound effect on American life in the shortest amount of time. The ruling in Janus effectively makes all public sector jobs “right to work,” meaning that employees cannot be compelled to pay union dues.

This may seem like a reasonable point of view, but employees who do not pay dues still enjoy the protections of the union. This means that union staff and resources could be stretched to a breaking point. It also means that conservative interests can attempt to convince members to leave unions, draining their coffers.

It is the Court’s contention that “agency fees” constitute speech and should be protected by the First Amendment. The real result of this ruling, however, will be to limit the power of public employees, including public school teachers, across the country, and severely limit their workplace protections.

In essence, freedom of speech is being used an excuse to take away the control that public employees have over their wellbeing.

While many in the media are speculating on the demise of public unions, union organizers and writers on the Left are preparing to fight for their rights. Many view the recent success of teachers’ strikes in states where they were technically illegal as a potential new model for a temporarily weakened labor movement.

As Bill Fletcher Jr. wrote in labor publication In These Times following the decision, “Janus is not the end of the story. It is simply the end of a chapter.”

AFSCME v. Janus was not the only case before the Court that stretched the First Amendment interpretation. Religious groups across the country run “crisis pregnancy centers,” which appear to be something like Planned Parenthood or an abortion clinic, but in reality, exist to indoctrinate women so that they will decide not to terminate a pregnancy.

The California Legislature found that these clinics use “intentionally deceptive advertising and counseling practices that often confuse, misinform and even intimidate women from making fully informed, time-sensitive decisions about critical health care.”

According to SCOTUS, that doesn’t matter.

The argument of the majority hinged on the idea that requiring these centers to be honest about the services they offer and provide information about alternatives violated their free speech. California’s FACT Act, passed in 2015, required clinics to either provide or post information about reproductive care offered by the state, such a low-cost birth control and abortion services. The Court ruled that this law is a constitutional violation of a clinic’s speech rights.

Who knew fake clinics could talk?

Justice Stephen G. Breyer articulated the ridiculousness of this position quite clearly. He addressed the Court, asking, “If a state can lawfully require a doctor to tell a woman seeking an abortion about adoption services, why should it not be able, as here, to require a medical counselor to tell a woman seeking prenatal care or other reproductive health care about childbirth and abortion services?”

Women’s health advocates and pro-choice activists see this as a signal that the conservative court is prepared to launch further attacks on abortion rights as they enjoy a Republican majority for the foreseeable future.

SCOTUS also upheld President Trump’s ban on citizens from particular countries, most of which have Muslim majorities. Though colloquially known as the “Muslim Ban” current restrictions include seven countries, some of whom do not actually have Muslim majorities, and most of whom have a lower economic output than their regional neighbors. Conservative justices ruled 5-4 that the ban was within Trump’s powers as a chief executive.

The four liberal on the court sharply disagreed. Justice Sonia Sotomayor compared the decision to Korematsu v. United States which endorsed the detention of Japanese-Americans during World War II.

Not only does this decision validate Trump’s ban, but it provides him with additional ammunition as he tries to justify his policies at the Mexican border, including the separation of children from their parents.

Lower courts had found that Trump’s ban was unconstitutional in part due to the president’s overt Islamophobia. Chief Justice Roberts wrote that, in essence, it doesn’t matter if what the president does is bad because he is the president. He said, “…the issue before us is not whether to denounce the statements. It is instead the significance of those statements in reviewing a Presidential directive, neutral on its face, addressing a matter within the core of executive responsibility.”

Sotomayor responded to this line of thinking rather directly, writing in dissent, “this repackaging does little to cleanse Presidential Proclamation No. 9645 of the appearance of discrimination that the President’s words have created. Based on the evidence in the record, a reasonable observer would conclude that the Proclamation was motivated by anti-Muslim animus.”

While this case may not draw the immediate ire of the public like the cases above, Abbot v. Perez is also aimed at taking power away from the relatively powerless. This is the next in a series of gerrymandering cases that in various levels of the American court system.

In this instance, the Republican majority predictably upheld Texas electoral maps that are widely considered to be deeply gerrymandered in favor of the GOP. Lower courts found that the maps were racially discriminatory, and the SCOTUS majority had no problem with that.

There are a number of irregularities in this particular case that differentiates it from some other gerrymandering cases that have been heard, regarding the timing of elections and when maps were drawn. In fact, the dissenting justices held that this case shouldn’t have been before the court in the first place.

However, the substance of the case is summed up in Justice Sotomayor’s dissent, which got to the heart of the matter.

She wrote: “The court today goes out of its way to permit the State of Texas to use maps that the three-judge district court unanimously found were adopted for the purpose of preserving the racial discrimination that tainted its previous maps…This disregard of both precedent and fact comes at serious costs to our democracy. It means that, after years of litigation and undeniable proof of intentional discrimination, minority voters in Texas — despite constituting a majority of the population within the state — will continue to be underrepresented in the political process.”

These four decisions reflect the America SCOTUS is ruling on: deeply divided. However, they also reflect the political realities of our current moment. While The Court is split roughly down the middle, the stakes are winner take all.

Right now, it is the powerful that are winning, and it is the “have-nots” who are suffering, thanks to these legal decisions. With no liberal relief for the Court on the horizon, you can’t help but wonder if that will change any time soon. You have to wonder if this is the new normal in American life.