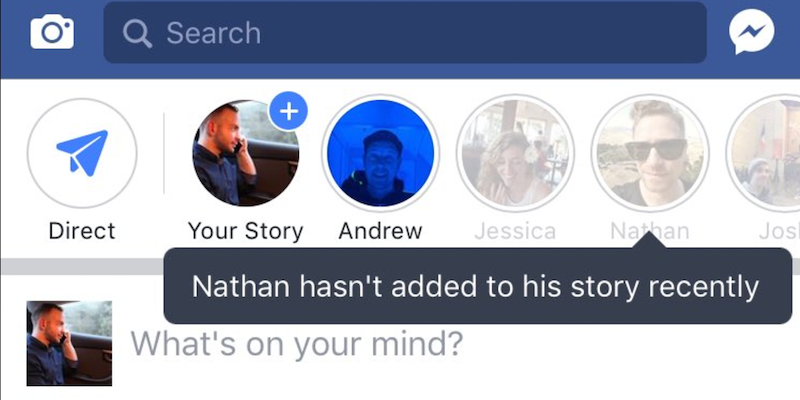 Facebook’s troubled Stories feature is coming to the desktop

Stories is in testing with a wide launch coming 'soon.'

Facebook isn’t giving up on Stories, the Snapchat clone no one seems to be using. TechCrunch confirmed with the social giant that it’s testing a desktop version of the feature.

Facebook says it will “soon” roll Stories out to more users, so expect to see changes in the coming months. The pre-release version is only available to select users. Those lucky folks will see a “Stories” section on the top-right corner of their News Feed on the desktop version of Facebook. It looks very similar to the Stories section on the mobile app with its circular profile photo icons.

TechCrunch says there is a small question mark in the Stories section that explains what the feature is all about. If you’ve used Snapchat (or Instagram) before, you should be familiar with it. Stories is a place where you can post or view other people’s photos and short videos for a 24-hour period before they disappear forever.

The social network already launched Stories for its mobile app, but failed to find the success of Snapchat Stories, or the even more popular imitation from Facebook-owned Instagram. In April, Facebook desperately grayed-out people’s Story icons in what appeared to be a move to guilt people into using the feature. It’s not clear why Facebook would want to expand Stories, perhaps it feels a new audience who is less accustomed to the feature can help rejuvenate it.

Facebook did not say what percentage of users are testing the feature, or when it plans for a wide release.