A mysterious group claiming ties to Russia prompted Facebook to ban more social media accounts Tuesday, just hours after over 100 profiles were removed for engaging in “inauthentic behavior” ahead of the midterm elections.

The alleged Russian group, which refers to itself as the “Internet Research Agency American Department,” argued in a statement online that U.S. “intelligence agencies are powerless” to stop election interference.

“Despite all their efforts, we have thousands of accounts registered on Facebook, Twitter and Reddit spreading political propaganda,” the group said. These accounts work 24 hours a day, seven days a week to discredit anti-Russian candidates and support politicians more useful for us than you.”

The group even appeared to be aware of Facebook’s actions the prior day, when the social media company removed roughly 30 Facebook accounts and 85 Instagram accounts following a tip from U.S. law enforcement.

“Facebook and intelligence agencies tried to stop us but they only managed to uncover 1/25 of the whole picture,” the group said.

The purported troll group’s statement was followed by screenshots of links to more than 90 Instagram accounts, allegedly used to spread propaganda online. Some of the accounts had been banned by Facebook, others were still active until Facebook removed them.

The account names reference everything from celebrities, including rap star Nikki Minaj and musician Kid Rock, to left-wing and right-wing causes, both for and against. 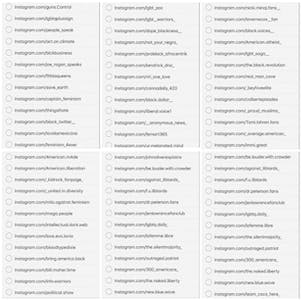 In a statement to TechCrunch Tuesday, Facebook said it removed the accounts listed after becoming aware of the group’s website.

“We had already blocked most of these accounts yesterday, and have now blocked the rest,” Facebook said. “This is a timely reminder that these bad actors won’t give up — and why it’s so important we work with the US government and other technology companies to stay ahead.”

According to Facebook’s Nathaniel Gleicher, Head of Cybersecurity Policy, many of the accounts were found to be in violation of company rules by engaging in “coordinated inauthentic behavior.”

“We immediately blocked these accounts and are now investigating them in more detail,” Gleicher wrote in a blog post Monday. “Almost all the Facebook Pages associated with these accounts appear to be in the French or Russian languages, while the Instagram accounts seem to have mostly been in English—some were focused on celebrities, others political debate.”

Facebook appeared to initially suspect the IRA, which was similarly accused of interfering in the 2016 presidential election, in a blog post Monday announcing the initial account removals.

“Once we know more—including whether these accounts are linked to the Russia-based Internet Research Agency or other foreign entities—we will update this post,” Facebook had said.

Whether or not the supposed IRA-linked group is actually working on behalf of Russia remains to be seen.

The Daily Dot contacted the alleged Russian group through an email listed on its website but did not receive a response at the time of publication.

Facebook also failed to respond to questions from the Daily Dot regarding the accounts.