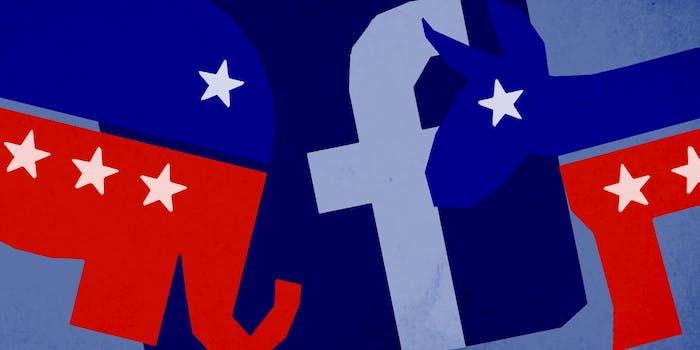 Facebook has a political label for you, and it’s using that to make money

Does Facebook think you're a liberal or a conservative? Here's how to find out.

There is no escaping the 2016 election, especially if you use Facebook.

The social network has boosted the political leanings of its users to a new dimension, reports the New York Times, by giving each user his or her own political label based on their Facebook activity in an attempt to rake in campaign ad dollars.

To find out how Facebook categorizes your political beliefs, log in and visit Facebook.com/ads/preferences. Scroll down to the “Lifestyle and culture” tab, and look for the “U.S. Politics” box. In parentheses, you’ll see your Facebook political label. Click on it for slightly more information. You also have the ability to tell Facebook that you don’t want to see ads based on that data point.

This ads preferences page holds a wealth of other information that Facebook has gathered on you. For example, it knows the devices you use, your preferred browser, where you’ve traveled (and when you’ve used a travel app), and what technology you use to connect to the internet.

It also includes all types of stuff that, well, doesn’t make a whole lot of sense. Under the “Travel, places, and events” category, it shows a slew of things for me that I simply don’t understand.

I have never been to Chongqing. So why is it in my Facebook profile?

In addition to its advertising reach, Facebook holds immense power in American politics. A 2016 Pew Research study found that 44 percent of U.S. adults get their news from Facebook, which the company curates using an algorithm in the same or similar ways as it serves ads—meaning what you click and like on the platform determines what else you will see.

Thanks to recent changes to Facebook’s News Feed algorithm, which favors people over publishers, there’s a high likelihood that those who get their news primarily from Facebook are sticking themselves into a bubble of one-sided information.

That information sometimes includes ads, served to you based on your personal information, which are now harder than ever to block.