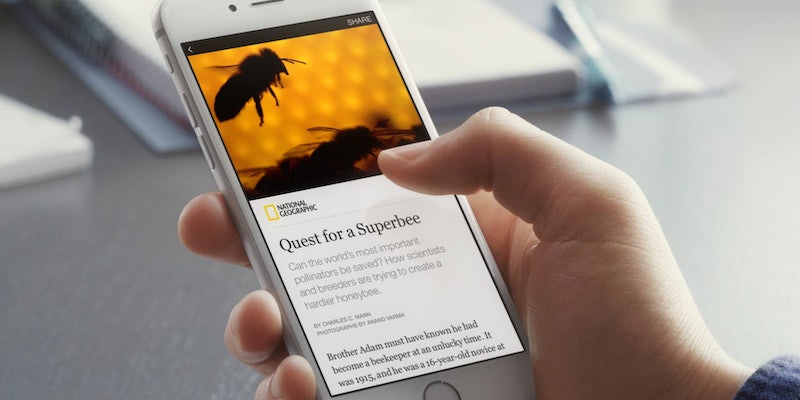 With Instant Articles, Facebook aims to keep you in its app forever

It remains to be seen if people will change their reading habits to accommodate this feature.

As of Wednesday morning, Facebook is in the publishing business. The social-network-turned-tech-behemoth is starting to roll out Instant Articles, its new publishing platform that hosts content directly on its servers and loads them within the News Feed, eliminating the need for users to venture off of its site.

According to Facebook, the average article takes about eight seconds to load on mobile devices. Over 798 million people check Facebook from a mobile device each day, according to Facebook’s first quarter earning report; the monthly figure is around 1.25 billion. Instant Articles will significantly reduce the load time for those users, making the reading experience up to ten times faster. Facebook says it accomplishes this by leveraging the same technology used to quickly display photos and videos.

The first group of publishers with content displaying as Instant Articles in the News Feed includes the New York Times, National Geographic, NBC, BBC News, BuzzFeed, the Atlantic, the Guardian, and the German newspapers Der Spiegel and Bild.

Facebook is building new features into its platform exclusively for Instant Articles crafted by these outlets, including the ability to explore high-resolution photos by tilting the phone, interactive maps, audio commentary, and auto-play videos. Users will be able to like and comment on individual parts of the story, à la Medium’s commenting system. Participating publishers will also be able to share standard articles without the additional bells and whistles.

Instant Articles is only available on iOS for the time being, but an Android release is expected to follow soon. For now, though, Android users will be stuck waiting those extra seconds.