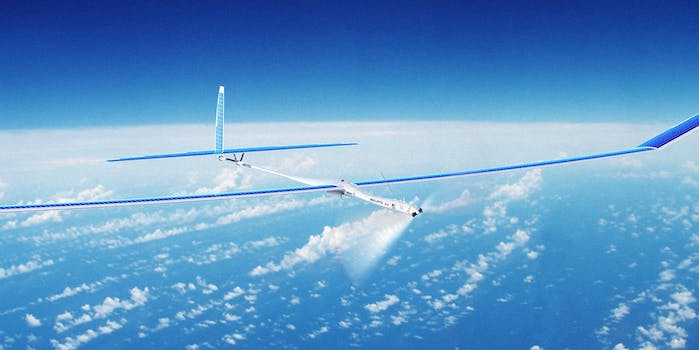 We knew they were coming, but we didn’t know just how big they’d be. Facebook announced its intentions to build a fleet of drones earlier this year, and at Mashable’s 2014 Social Good Summit, Yael Maguire, director of engineering for Facebook Connectivity Lab, detailed more of the social company’s plans to launch planes to beam a reliable Internet signal to parts of the world that remain unconnected.

Mark Zuckerberg announced the initiative, in partnership with Internet.org, in March with the introduction of the Facebook Connectivity Lab. The lab is tackling the engineering side of the ambitious project, which ultimately aims to “make the Internet available to the two thirds of the world’s population that doesn’t have it.”

The drones—though Facebook would prefer you call them “planes”—would be capable of staying in the skies for incredibly long lengths of time, possibly even for years at a time, a trick they’d pull off using solar energy. They would hang out in the airspace between 60,000 and 90,000 feet, which isn’t busied by commercial air traffic. Unlike many consumer-level drones, Facebook’s aircraft would each be about the size of a Boeing 747. The project will face a number of regulatory hurdles, including one that stipulates that each craft would need a pilot (Facebook would prefer if one pilot could control 100 of these aircraft simultaneously).

Facebook is planning on getting one of its test planes aloft as soon as 2015, likely over U.S. skies—a test location which Mashable reports “may or may not ever be revealed to the public.” If all goes according to plan, the giant, flying Internet hotspots would cruise the airspace above 21 target countries spread out among South America, Asia, and Africa.

Of course, the project is under the umbrella of Internet.org and Facebook’s social good initiatives, but it certainly wouldn’t hurt if the huge portion of the population that remains offline starting using the biggest social network the world has ever known.