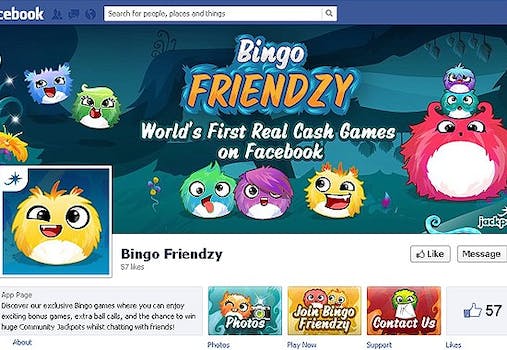 Even better, Facebook will hide your gambling activity from your timeline.

For the first time ever, Facebook is allowing gambling on its platform—with real money.

The social network has approved an app called Bingo Frenzy, which lets users play games for cash. Before you get too excited, the app is restricted only to Facebook users in the United Kingdom.

Bingo Frenzy was created by Gamesys, the London-based developer behind Jackpotjoy.com, the largest online gambling site in the U.K..

In order to play Bingo Frenzy, users will have to verify their age and location via their Facebook account. In addition, Facebook will also use age-gating technology to ensure your gambling activity doesn’t appear on your timeline.

Why the UK..? Gambling is already prevalent in the region, which means that it’s heavily regulated.

“Real money gaming is a popular and well-regulated activity in the UK,” a Facebook spokeswoman told the BBC,”and we are allowing a partner to offer their game to adult users on the Facebook platform in a safe and controlled manner.”

Although the social network is downplaying its involvement with the gambling venture, claiming that they’re merely approving it, Facebook stands to make a tidy profit down the line by allowing real-money gambling.

The move opens the floodgates for other major developers to get in the game. Zynga, one of Facebook’s largest partners, has already announced it too will be creating real-money gambling apps within the year.

According to experts who spoke to Business Insider in January 2012, online gambling could eventually make Facebook a $100 billion business.