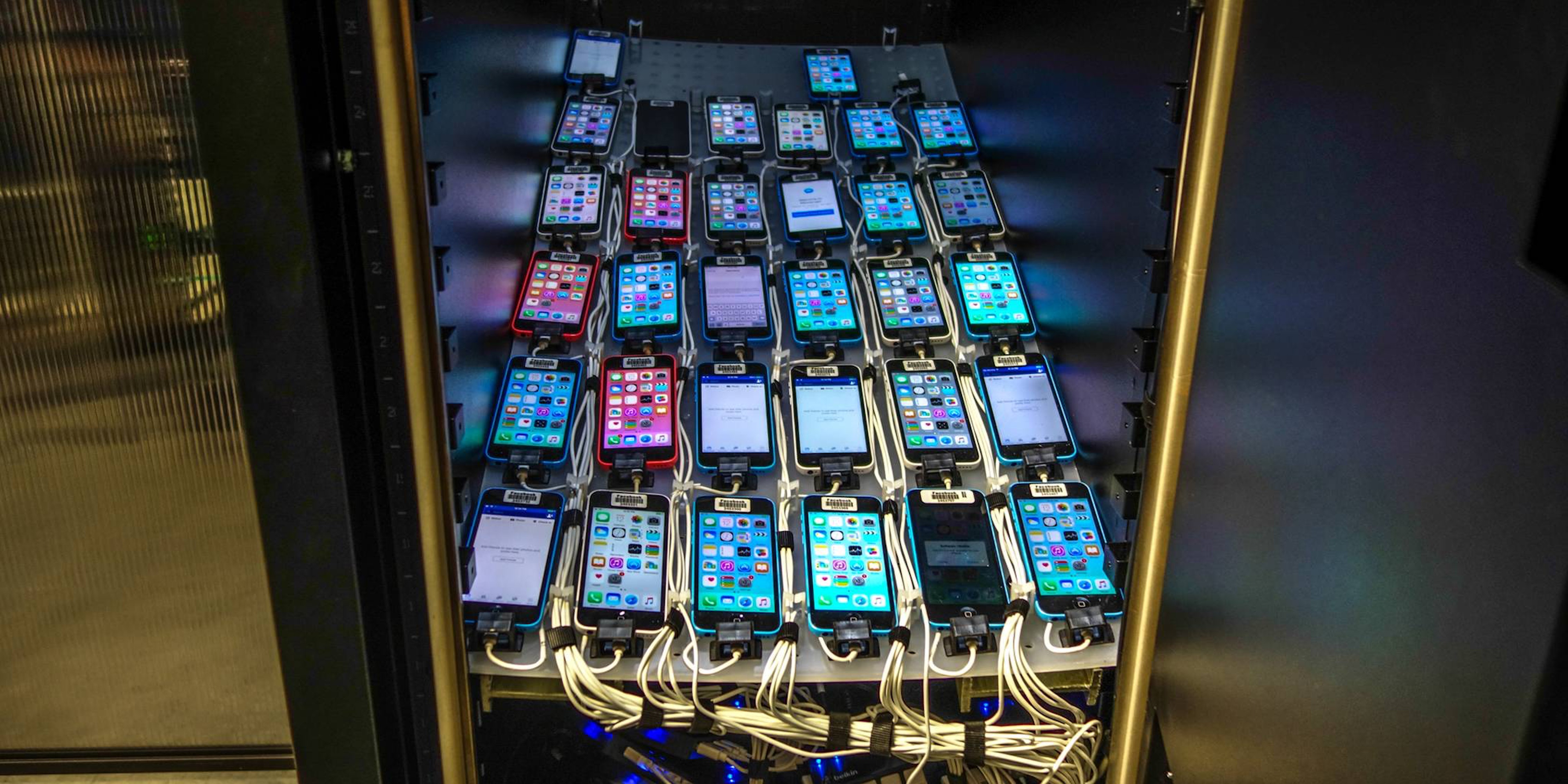 Watch Facebook’s army of 2,000 zombie phones test app updates before you can break them

Facebook's test lockers are like a scene from a sci-fi movie.

In the back of a 350,000 square foot warehouse on the top of a remote, sagebrush-spotted butte in central Oregon, Facebook is hoarding an army of zombie phones.

Just five years ago, Facebook’s app sucked, and the company knew it. Fast forward four years, more than half a billion new users, one Instagram acquisition, and now mobile revenue makes up 80% of the company’s hefty ad earnings. Mobile is Facebook’s beating, cash-pumping heart, and that means keeping its 1.65 billion users happy with a stable of apps, including Instagram and Messenger.

To that end, Facebook runs a mobile testing lab that looks like something you’d see on Mr. Robot or maybe in a cheesy CSI montage about hackers. In order to keep its mobile experience as sharp as possible, the company stores 2,000 smartphones in a series of glossy black lockers, each with its own dedicated wifi network. The testing ward, code-named “CT-Scan,” is abuzz with an array of makes and models, Samsungs running various Android builds and plenty of iOS devices of course.

Each locker stores 32 whirring, blinking phones, arranged in a neatly chaotic grid. As code pushes live from Facebook HQ, any update that might slow down one of the company’s apps or worsen battery life for the user gets quantified, caught, and dispatched in real time.

The entire process is automated: the possessed phones blink to life, browsing news feeds and loading selfie reels. Between the zombie phones and the blue glow of nearby server racks, the effect is actually kind of eerie.

In accord with Facebook’s classic “move fast and break things” mantra, these 2,000 locker-bound test phones flicker on and off, speeding through the company’s app suite to see what works and what breaks. If a new Instagram update wreaks havoc on battery life for the iPhone 5c, for example, the so-called “regression” gets flagged and an email alert will hit a developer’s inbox in Menlo Park. At that point, it’s back to iterating—a word Facebook loves.

“If it looks good, it goes into the wild now,” explains Antoine Reversat, production engineer for the mobile testing lab. “We push code all the time,” Ken Patchett, the site’s director, chimes in.

Much like the Menlo Park mothership, the mobile testing lab cares a lot about Facebook in emerging markets. With most of the Western world saturated by the big blue social network, the company knows it needs to look abroad to places like India and Africa if it’s going to keep growing, so it’s not surprising that Facebook also stocks its test lockers with feature phones to see how its apps perform on less capable hardware.

The only thing you won’t find in Facebook’s collection of zombie phones is a BlackBerry.