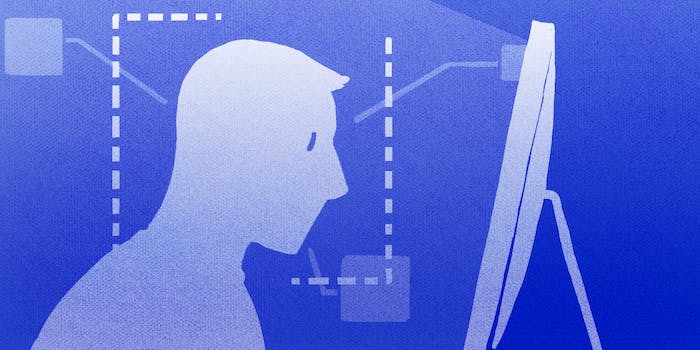 Facebook’s new image-recognition feature is the creepiest thing ever

You can't run or hide, but you could deactivate.

Facebook‘s ever-growing list of creepy features and policies is practically a meme at this point, but the latest product from the company’s artificial-intelligence team really kicks things up a notch.

Facebook’s AI engineers have developed an algorithm that can identify and tag people even when their faces are not visible—for example, when they’re shielding their faces to prevent being recognized. In lieu of facial features like eyes, a nose, or a mouth, the algorithm looks at hair styles, apparel, and even body posture.

“There are a lot of cues we use” to identify people, Yann LeCun, Facebook’s director of AI research, told New Scientist. “People have characteristic aspects, even if you look at them from the back. For example, you can recognise Mark Zuckerberg very easily, because he always wears a gray T-shirt.”

Ha ha ha. But LeCun’s joke in no way disguises the threat that the algorithm poses to online privacy.

For now, Facebook is still evaluating the feature. In a test run, the results of which were presented at a recent conference in Boston, the algorithm correctly identified people with 83-percent accuracy.

New Scientist notes that the algorithm would be especially useful to Facebook when paired with the company’s newest photo-sharing service, Facebook Moments.

We’ve reached out to Facebook for comment on the facial recognition system’s implications and will update if we hear back.