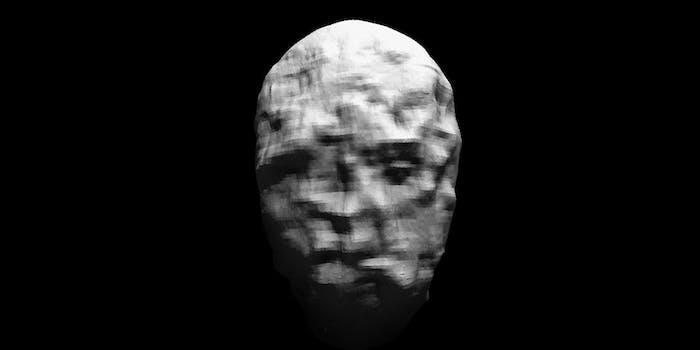 To Facebook’s computers, your face looks like a monster

What do computers see when they stare at us? In a project called Data-Masks, artist Sterling Crispin hopes to shift the perspective on being watched, placing the subject in the perspective of the machines that parse human bodies through 3D facial recognition technology. The result is a set of masks that scramble the identity of the human face into a blank, lumpy mass.

The 3D-printed masks are as much protest as they are art.

“These DATA-MASKS give form to an otherwise invisible network of control and identification systems and make their effect on our identities tangible and visible,” Crispin writes. The result is a fascinating physical representation of the sophisticated, mostly opaque processes that computers spin through in facial recognition software, like the Facebook tool that suggests who to tag in a photo.

I’m using state of the art face recognition and face detection algorithms to guide an evolving system toward the production of human-like faces. This exposes the way the machine and the surveillance state view human identity and makes aspects of these invisible power structures visible.

The end result of an algorithm detecting patterns and identifying subtle facial differences is a user-facing tool that’s useful enough to not call into question. Post a photo and instead of typing out the name of its subject, the computer does that for you. But what’s going on under the hood has many implications, and Crispin’s project deconstructs and reconstructs the process—resulting in physical representations of what happens when computers reverse engineer identity.

It’s heady stuff, but more relevant than ever. As we watch computers watch us watch them, software pumps the 1s and 0s of human identity out to servers around the world—and that’s something we should remain acutely aware of, if you ask Crispin: “…My goal is to show the machine what it’s looking for, to hold a mirror up to the all-seeing eye of the digital-panopticon we live in and let it stare back into its own mind.”