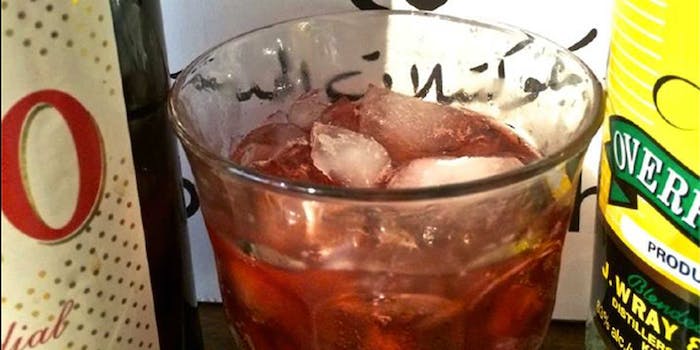 Now that a bar sells ‘F*** ISIS Punch,’ are we officially at war?

It’s actually none of those things. A country isn’t really at war until someone in that country makes a food item insulting the other side.

During WWI, Americans rebranded sauerkraut as “liberty cabbage” and frankfurters as “hot dogs” because the words were too closely associated with the hated Huns. During the early days of the 2003 U.S. invasion of Iraq, congressional Republicans started calling French fries “freedom fries” in protest of France not joining their quixotic quest to separate Saddam Hussein from the weapons of mass destruction that didn’t exist.

Thanks to a new pop-up cocktail bar in Washington, D.C., the U.S. is officially at war with ISIS, also called ISIL or just the Islamic State. Named The Green Zone, after the area in central Baghdad where the invading forces were based, the bar’s most popular cocktail is called the F**k ISIS Punch and, yes, it does come with a stick of bacon.


The Green Zone was started by a pair of Iraqi-American cousins who wanted to wanted to combine craft cocktails with Middle Eastern flavors. The F**K ISIS Punch, for example, consists of a couple different types of rum, a fruity English soft drink called Vimto that’s popular in the Middle East, and house-made bitters.

“We come from a very secular background and ISIS represents the epitome of everything we hate,” explained Green Zone cofounder Chris Hassan Francke, whose day job involves doing financial analysis at the World Bank. “We offer the drink with an optional bacon garnish because we want it to be as offensive to ISIS as possible.”

Other drinks at the Green Zone, so named because the original Green Zone was the one place in Baghdad foreigners could get a cocktail during the invasion, include a saz’iraq—a play on the New Orleans favorite Sazerac that switches out absinthe for a Middle Eastern herbal liquor—and the Ottoman-insipred Janissary Corps, which features Green Hat gin and house-made pistachio syrup

The pop-up is doing a weekly residency inside of the 14th Street watering hole Black Whiskey every Friday night throughout the month of October and, thus far, Francke insists that his effort’s tounge-in-cheek style is resonating with patrons.

Photo by The Green Zone/Facebook